Sorabel had been on the right track. The Indonesian fashion ecommerce startup was seeing healthy growth after a rebrand in early 2019 and was on a path to profitability, says co-founder and recently resigned CEO Jeffrey Yuwono.

It just needed to raise money first via a series C round targeted for US$30 million from mostly Chinese investors, with plans to close by April 2020.

Then Covid-19 happened. Sorabel’s investors, facing uncertainty as well as travel restrictions in China and Indonesia, dropped out. Meanwhile, its customers had to tighten their belts as they dealt with furloughs and job cuts.

Like many other startups and tech companies, Covid-19 exposed Sorabel’s key liability: a short financial runway. It wasn’t sufficient enough to make it through the pandemic or even to pivot into short-term strategies. It also told employees last week that it would not be able to pay salaries beyond this month.

Now, about six years after its founding, the company is under administration as it searches for a potential buyer.

Sorabel had started out as Sale Stock, which was established by husband-and-wife team Lingga Madu and Ariza Novianti to sell affordable clothes to Indonesia’s middle-low segment. Unlike marketplaces Zalora and Berrybenka, Sale Stock adopted a “private label” approach. While this involved extra costs, it also gave the business better margins and the ability to quickly meet consumer trends.

The company raised US$27 million in series B funding in 2017 from high-profile investors, including Alpha JWC Ventures and Gobi Partners, along with Indonesian conglomerates Sinar Mas (through its venture capital arm, SMDV) and MNC Media.

Two undisclosed bridge rounds followed in 2019. According to ACRA filings for Sale Stock’s Singapore entity, the company has a total of US$69 million in paid-up capital.

Yuwono joined as president in 2016, became an official co-founder, and eventually took over the CEO helm in 2018. At the center of his strategy was the company’s rebrand from Sale Stock to Sorabel, which happened in early 2019.

Sorabel was not yet profitable, though it had gross margins of 58%.

The name change heralded its transition from a “low-cost fashion provider” – as implied by the word “sale” in the name – into an “up-to-date, risk-free shopping” place, Yuwono said at the time. While revenue had initially fallen, he said that it rebounded within a few months, and Sorabel was back on track towards the end of 2019.

“We grew really quickly over the year,” Yuwono tells Tech in Asia. “We grew revenue by 2.4x, and the awareness for the Sorabel rebrand started to accelerate in Q4 2019.”

Along with “double-digit” growth by the fourth quarter of 2019, the company was also CM3 positive, says Kevin Widlansky, Sorabel’s chief financial officer. CM stands for contribution margin, which measures revenue on a gross or per-unit basis after deducting variable costs. CM3 refers to the contribution margin after deducting variable costs including marketing expenses.

“What that tells you is that we were selling goods more efficiently at lower marketing spend,” the CFO points out. 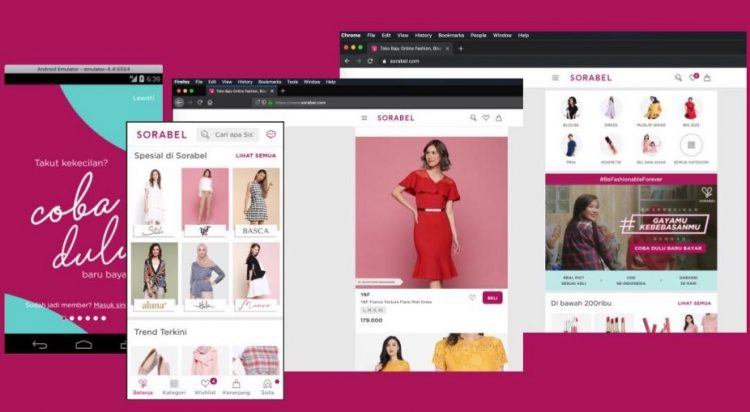 Sorabel, however, was not yet profitable, though Yuwono claimed that it had gross margins of 58%. The company was targeting profitability by Q1 2021, which required it to focus on a “much leaner and more flexible” supply chain, according to Widlansky.

To do this, Sorabel also needed to secure its series C round. The team was confident that it could leverage on the momentum to raise additional money, and they were “very close” to doing just that, Yuwono says.

Sorabel had spoken to plenty of investors, primarily China-based ones, Widlansky says. Some of the talks had progressed to advanced stages when the Covid-19 pandemic derailed those plans.

“We had potential investors close to closing, but in the end, they pulled out,” he explains. “It was hard to blame them. It was a very uncertain time.”

Even before Indonesia itself started to close its borders and instituted large-scale social restrictions, Covid-19 was already spreading in China in January 2020. The resulting lockdown meant that interested investors were unable to fly into Jakarta.

Potential backers found it hard to commit to the US$30 million round “without being able to visit onsite and conduct due diligence,” Yuwono observes. “It was really disheartening when those funds disappeared. We went from meeting 10 investors weekly to literally zero overnight.”

“Since 2016, we’ve never had more than six months of runway,” Yuwono says. “This provided good discipline in that we had to always be ultra-focused on making improvements to merit more new funds. However, the margin of error was so small and certainly not enough to survive the force majeure of a global pandemic.”

The ex-CEO says that Sale Stock was founded with a fast-growth mindset. When he joined four years ago, the company tried to combine growth with better unit economics. Contribution margins improved by 6x while the burn rate was reduced, but even then, they were still unprofitable.

The company had become too bloated, having laid off over 100 employees in 2016. Yuwono says that the infrastructure had expanded to meet its rapid early growth, but he concedes that they probably didn’t need so many offices or people.

“As long as growth remained rapid and capital remained inexpensive, such a strategy made sense,” he says. That growth assumption started to falter in 2016, which ultimately led to the rebrand.

Covid-19 also left Sorabel’s main customers – Indonesia’s the middle and lower-middle classes – reeling from layoffs both temporary and permanent. With fashion being a “discretionary” segment – it’s more of a luxury compared to, say, consumer goods – sales across the industry dropped as disposable incomes shrank.

At Sorabel, items such as homewear or pajamas did better, but the company’s bread-and-butter categories of blouses and dresses saw a “big decline,” Yuwono says. “People aren’t going out to meet friends or go shopping. There’s less need [for] fashion.”

Indeed, Sorabel’s estimated website visits fell from April 2020 onwards, according to SimilarWeb. After a peak of 1.15 million visits in March 2020, the number plunged to 410,000 by April and has since stayed below the 500,000 mark.

Covid-19 also wreaked havoc on Sorabel’s sales during Hari Raya, which is traditionally when Muslim Indonesians would purchase new clothes as part of the festivities. Based on third-party estimates, Sorabel’s number of active app users typically reaches its yearly peak around the holiday, which usually falls between May and June. With the pandemic, that was no longer the case.

Not only did Covid-19 affect overall demand, but it also constrained Sorabel’s ability to restock, Widlansky notes. “We couldn’t get new stock out to sell. Demand was weak, and that ripped our runway,” he says, calling the situation a “double whammy.”

In the early days of the health crisis, Sorabel did reduce its burn rate through furloughs and unpaid leaves. It had also pivoted to producing masks and personal protective equipment (PPE) for hospitals, as other fashion tech companies like Zilingo have done, but it got similarly mixed results. While the masks were selling well, with the first batch selling out in seven hours, “there’s only so much margin that you can generate,” Widlansky says.

He adds that PPE was a “potential game changer” because of higher prices and margins, but the buyer Sorabel had lined up was a large medical institution in the midwestern US. This became a non-starter when Indonesia put in place regulations that temporarily prohibited exports of masks and PPE.

Ultimately, Sorabel abandoned the PPE project as it was unable to find domestic buyers, either. A more significant pivot, perhaps to categories outside fashion, might have been possible, if it weren’t for Sorabel’s tight cash reserves.

Yuwono, who served as CEO for about two years, tendered his resignation in June, though he’s staying on to help with the transition.

“I think Covid-19 was pretty demoralizing, and I started to question whether I was the right leader for Sorabel going forward,” he shares.

According to Yuwono and Widlansky, the best outcome would be for another company to take over the Sorabel brand. That would ensure employment for at least part of their staff, which numbered nearly 400 at last count.

“There’s nothing wrong with the company. It was doing really well,” Yuwono explains, citing a sell-through rate of 70% after 30 days and defect rates of less than 2%, which he says is “amazing” for a fashion business.

“If another company doesn’t pick it up and bring it forward, it just seems like such a waste,” he adds. “But it does seem like there are companies out there who recognize that value.”

Without talking specifics, Widlansky says they’re seeing “significant” interest from potential buyers, largely because of the brand’s strength with the customer base. If no buyer comes forth, Sorabel would most likely enter liquidation.

Yuwono says fashion operators would make the most sense as buyers, as they understand the industry as well as the value of Sorabel’s infrastructure. But he also emphasizes that at this point, that choice would be under the purview of administrators, and management would not have authority to decide. Still, there might have been room for the company to have avoided this outcome altogether. Both Yuwono and Widlansky agree that doing the pivot sooner could have made a world of difference.

That could have happened as soon as the moment he joined in 2016, Yuwono adds. Sale Stock’s marketing team believed that rebranding was necessary, but the company prioritized improving margins, fixing product quality, and revamping logistics.

“The main reason is that rebranding is capital-intensive and difficult, while we had high-growth targets and limited funds,” Yuwono says. “Would I have had the credibility to make such a change? That is a harder question to answer.”

“I liken it a lot to 2008 in the automotive industry,” says Widlansky, who started his career at General Motors. The US carmaker filed for bankruptcy amid the 2008 global financial crisis, while rival Ford avoided the same fate, partly because it had locked down financing prior to the crisis. Like General Motors, Sorabel was trying to refinance when Covid-19 broke out, he adds.

Sorabel’s burn rate could have been handled better as well. Yuwono recalls that when he joined, the company slashed its burn rate by 60%, which “felt like a lot at the time, but in retrospect, it probably wasn’t enough.”

“We could’ve really tried to raise more money ahead of making big changes” instead of after things were set in motion, he observes.