Ever dreamt of being paid to scroll through news? US-based BuzzBreak is making that come true by rewarding reading behavior with money, paying out around US$0.10 per article. The company says that its most voracious users have cashed out over US$1,000 in a month – it would’ve taken them at least 10,000 unique article clicks to arrive at that amount.

Paying users to consume news may seem like a novelty, but it’s common practice in China. Qutoutiao, the news app of Tencent, is a good example of this. “For readers, it is always too hard to resist free cash, especially those with time to kill,” says tech investor Chenhao Zhang, who leads Prometheus Fund.

Here’s how BuzzBreak works. It aggregates the news by displaying each article’s headlines and first few sentences to pique users’ interest and make them click on the story. That way, traffic gets redirected to the original news websites and readers get rewarded in points, which they can then cash out. 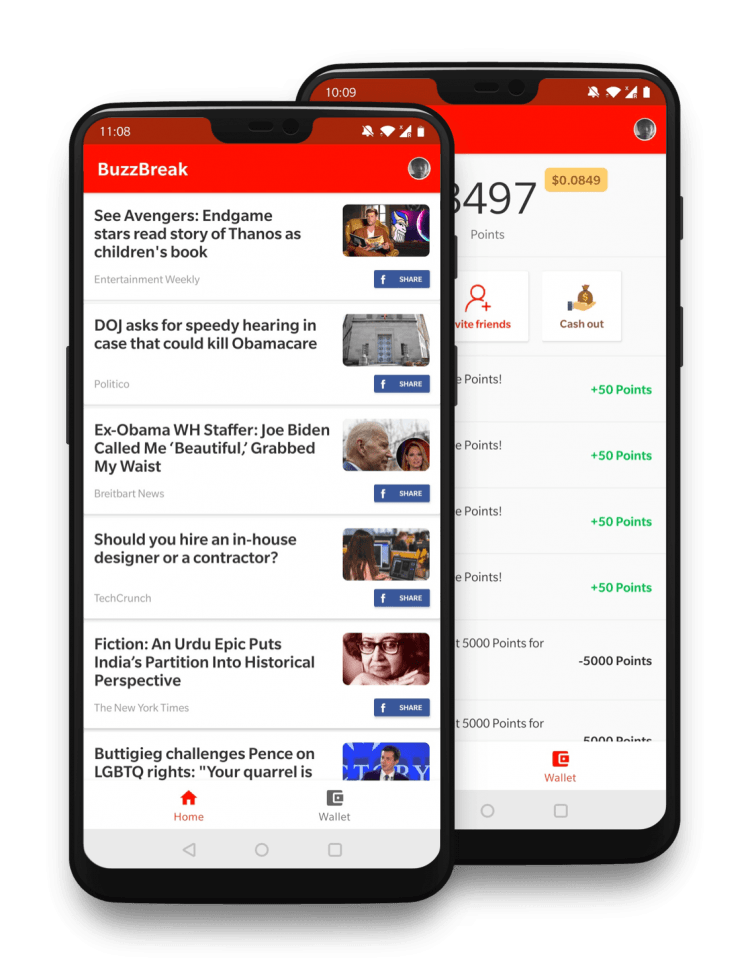 BuzzBreak makes money purely through partnering with third-party advertising platforms, which pay it to display ads every three to four articles. The startup says it doesn’t charge news providers a single cent.

“We increase their traffic at no cost. That’s because we want more of them to join us, as good content calls for a variety of news sources,” says BuzzBreak co-founder Aron Lyu. “And users stay because of good content.”

What’s interesting is that Lyu is a former product manager at Bytedance’s news aggregator TopBuzz.

All of the mistakes that were made in TopBuzz, I’ll try to avoid in BuzzBreak.

After leaving TopBuzz in May 2018, he joined a company called Partiko to help its CEO Sida Wang and chief technology officer Mike Ma develop a blockchain-based app designed to encourage users to create more content. Partiko started off by rewarding content creators with cryptocurrency. But as Lyu realized that cryptocurrency wasn’t as widely adopted as he hoped, the three of them decided to pivot to giving out money, leading to BuzzBreak.

“All of the mistakes that were made in TopBuzz, I will try to avoid in BuzzBreak… that’s why we’re focusing on localization efforts to fit individual countries’ needs,” says Lyu. To elaborate, he says that his startup allows users to cash out their earnings using e-wallet services.

“TopBuzz was [initially] only offering PayPal as a cash-out option for users, which wasn’t optimal as it had a very low penetration rate in Indonesia and Thailand,” Lyu says. TopBuzz now offers payments through bank transfers as well, though it still highly recommends PayPal due to “technical issues.” Tech in Asia reached out to Bytedance, but it declined to comment on this story.

The differences between TopBuzz and BuzzBreak also extend to their operating models. TopBuzz rewards users for creating content, rather than reading content like BuzzBreak does. TopBuzz also pays US$0.001 per click, a hundredth of what readers would get per click from BuzzBreak. TopBuzz users also have to fulfill more criteria to be awarded the credit, such as ad delivery, the appropriateness of content, and the amount of clicks received over time. These factors make their climb towards getting a full dollar much steeper.

TopBuzz has also received flak for stipulating that earnings need to reach at least US$100 before users can withdraw their money. In comparison, Lyu says BuzzBreak has “built trust” with users by allowing them to withdraw “small payouts.”

He sees these touches as part of BuzzBreak’s “creative and efficient” efforts to acquire users, as it has “less manpower and funding“ than TopBuzz.

And yet Lyu’s app is already beating out TopBuzz in several Asian markets a year after its launch, according to third-party estimates seen by Tech in Asia. This is despite the fact that the Bytedance news aggregator had a four-year head start.

BuzzBreak has achieved this despite being only available to Android users, but Lyu says it’s “launching soon” for Apple users. So far, it’s present in Thailand, the Philippines, Indonesia and Malaysia, where its user base is growing “really fast.” In less than a year, it has reached 3.5 million monthly active users (MAUs). 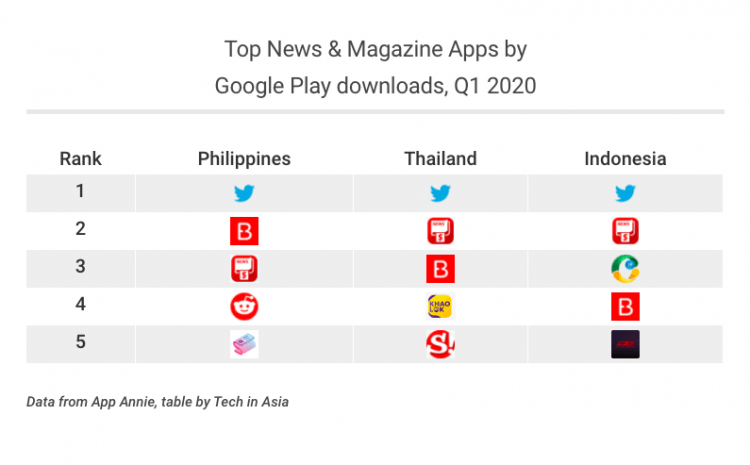 BuzzBreak ranks second in the Philippines, third in Thailand, fourth in Indonesia, and eighth in Malaysia (not in the table).

Data from analytics firm App Annie reaffirms BuzzBreak’s popularity. In three of its markets, BuzzBreak is among the top 10 most downloaded apps in the news and magazines category.

BuzzBreak’s top market in terms of popularity appears to be the Philippines, where it beat out the news app of ABS-CBN Corp., the country’s largest broadcasting network. Besides being the second most downloaded news app for the first quarter of 2020, BuzzBreak is also the fourth most-used app in the category in terms of MAUs.

Like TopBuzz, BuzzBreak curates personalized feeds of news and videos based on users’ browsing behavior. However, Lyu says the company’s algorithms have some catching up to do before it can match Bytedance’s family of apps, which have far more users.

Lyu reveals that Southeast Asia wasn’t exactly plan A. “We intended to target the US market, but days after launching BuzzBreak, the team found that there was an ‘influx of users’ in the Philippines,” he says. That led the startup to set its sights on Southeast Asia instead. 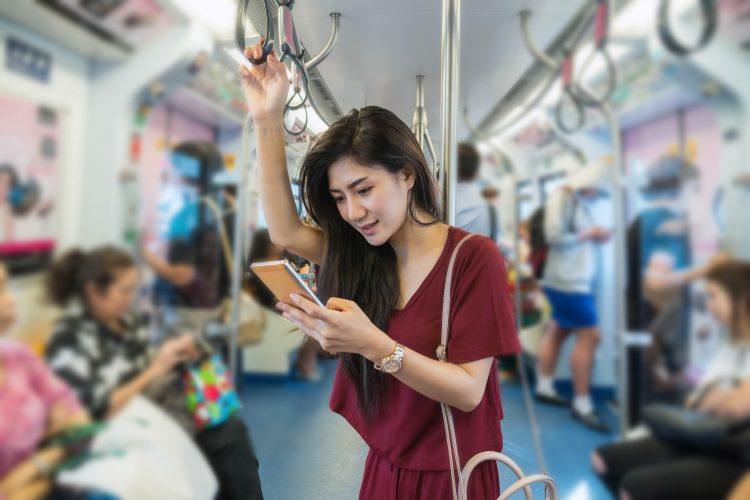 “We feel that most people [in the region] would like to earn some extra money, since income is relatively low,” he explains. “Earning a bubble tea [from using BuzzBreak] may be very appealing to our core users in Southeast Asia, but not so much in more developed countries like Japan and South Korea.”

Lyu also says his firm will expand to South America, which has a large population and lacks a “good news aggregator app.”

This plan comes after a fresh US$2 million fundraise in May led by ZhenFund, a seed-focused venture fund that’s been as dubbed China’s greatest angel investor. BuzzBreak also closed a US$600,000 angel round backed by Bertelsmann Asia Investments in late 2019.

Lyu reveals that BuzzBreak’s advertising-based revenue model is already profitable – a rarity in Southeast Asia’s startup community, which has been battered by the Covid-19 pandemic, among other factors.

“Our company is cost-efficient, as the only expenditure we have stem from running servers, paying salaries, and handing out user rewards,” notes Lyu. BuzzBreak has 10 employees:The majority are engineers based in Beijing while a few are located in the US.

Lyu also compares BuzzBreak’s cost structure to logistics company Ninja Van, which requires “a lot of upfront investment” because it needs to own “a lot of physical assets.”

“We struck a balance in figuring out a stable system to pay our users in a timely fashion, and also be profitable at the same time,” he adds.

“Some of them don’t read news at all and only watch ads,” wrote BuzzBreak in a post on its blog, saying that the sudden surge in users “triggered Google’s algorithm,” causing its Admob ads to be suspended.

Click fraud is a problem that tech giants like Google are trying to tackle. / Photo credit: Google

Here’s the rub with BuzzBreak’s model: As bots inundate online traffic, even accounting for 60% of it at one point, how does it tackle click fraud?

Lyu says that there are definitely users who try to “game” BuzzBreak’s rewards system, which is “always the case for any service that offers any kind of reward.” He adds that the team is “still improving the system to fight fraud.”

Current measures include a cap on rewards, though the number is unspecified. Also, users can only log into their account on a single device. BuzzBreak monitors unusual activity patterns as well, tracking suspicious refreshes and clicks and banning users that “abuse” its reward system.

Even with these steps in place, stamping out fraud may be hard with just 10 employees. As evident in the ecommerce and ride-hailing industries, people will try everything to rig the odds in their favor whenever cash incentives are involved. Separating real from bogus user engagement mayprove challenging.

[This] is a way to grow the user base, not a way to keep them.

Although many users are singing BuzzBreak’s praises, particularly about its how it helps them earn a quick buck, some are casting a more critical eye.

“Worth your time? Technically, no. You will just waste a lot of time playing with this and receive a little in return,” says a Filipino blogger, although he acknowledges that the app is “legit.”

Another reviewer from the Philippines says that the app’s potential is bogged down by its “very low cash-out potential.” As she observes, “You must have a lot of referrals in order to earn more points.”

Responding to the negative reviews, Lyu says that “different people may have different standards,” and it all boils down to “setting the right expectations.” However, he highlights the fact that BuzzBreak has close to a million followers on Facebook, which “speaks for itself” in terms of popularity.

According to Prometheus Fund’s Zhang, the model of pay-to-read apps like BuzzBreak and Qutoutiao “won’t work” for major internet companies. As he points out, “It’s a way to grow the user base, not a way to keep them.” 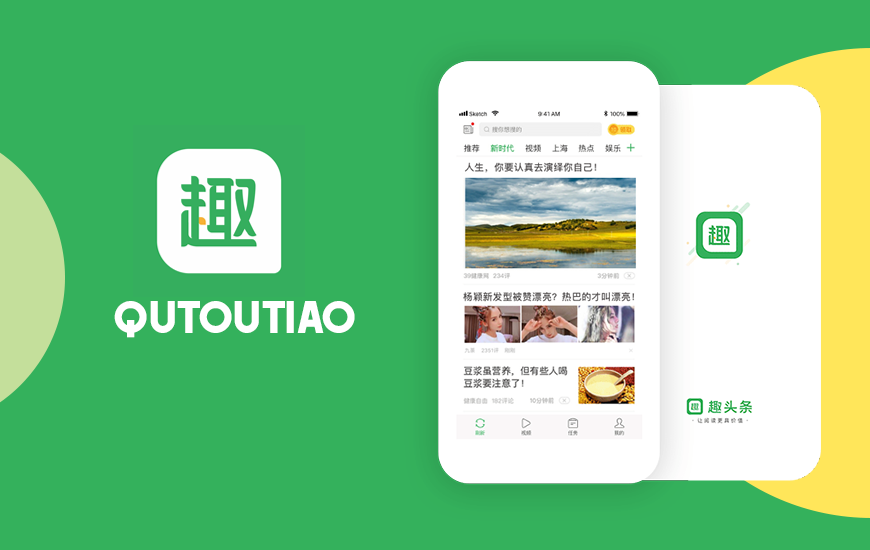 While Lyu agrees that good content is “very costly,” he says that BuzzBreak’s model is lightweight. “We don’t focus on content production. Our main focus is content distribution.”

Other than eyeing South America, Lyu tells Tech in Asia that BuzzBreak plans to “keep expanding” in Asia as he wants to “incentivize all the people [in the region] with low income to read more.” 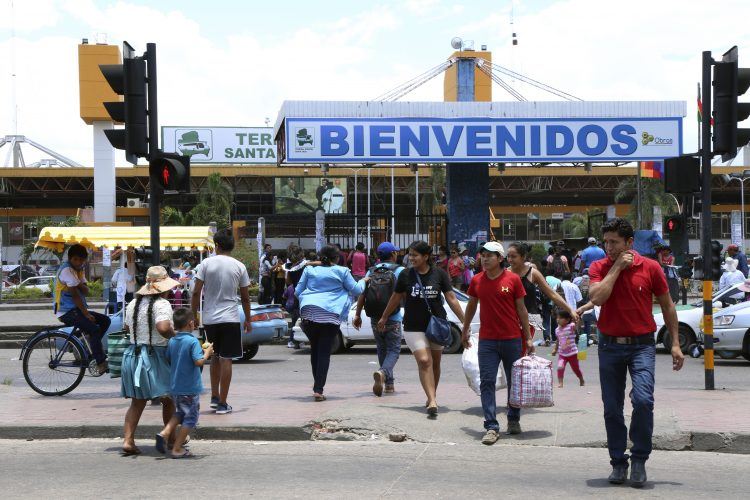 Zhang says that for BuzzBreak to maintain its growth trajectory in the long term, the firm needs to “keep itself financed.”

It’s inevitable that more competitors will pop up. Cashzine, another pay-you-to-read app, is taking off in the same markets as BuzzBreak. Bytedance may also decide to invest more money in TopBuzz. These developments may force BuzzBreak to spend more just to retain its users.

Lyu says that BuzzBreak will start advertising its app, sharing that the company has spent “zero dollars” on ads so far. The team is also looking for local partners in the media and payments space to “accelerate growth,” he adds.

Sustainability is another concern. “If you lower the amount of money, users will lose interest. But if you raise it, the cost is too high,” said Wei Wuhui, an academic and managing partner at tech-focused venture capital fund SkyChee Ventures, in a Reuters report about Qutoutiao. Fine-tuning incentives in the right way over time may be key to keeping the rate of user growth.

BuzzBreak just finished a round, so it isn’t seeking funding right now. But Lyu says the startup wouldn’t turn down investments, especially if they bring resources like local knowledge to the table.