Commentary: Should Masayoshi Son step away from SoftBank Group?

Japanese conglomerate SoftBank Group is among the high-profile casualties of the Covid-19 pandemic as many of its well-publicized technology bets have begun to unravel. In a recent interview with Forbes, founder Masayoshi Son said that 15 of the 88 portfolio companies in the SoftBank Vision Fund are likely to go bankrupt. But he also believes that another 15 companies should succeed.

What’s happening to SoftBank shows how the nature of technology venture investing may not always suit a listed company, considering the close media scrutiny and daily market fluctuations that it entails. It’s actually pretty normal that many venture-style investments will go bust, but a few investments can become home runs for the portfolio and deliver outsized returns, which could more than compensate for the portfolio companies that fail.

Indeed, despite the trouble with co-working firm WeWork, money lost on ride-hailer Uber, and problems with smaller but still noteworthy investments such as Indian hospitality startup Oyo, SoftBank Group’s total asset value is largely based on Son’s spectacularly successful early bet on Alibaba. As shown below, more than half of SoftBank Group’s asset value stems from its stake in the Chinese giant, paying  off massively and making up for most of Son’s underperforming investments. 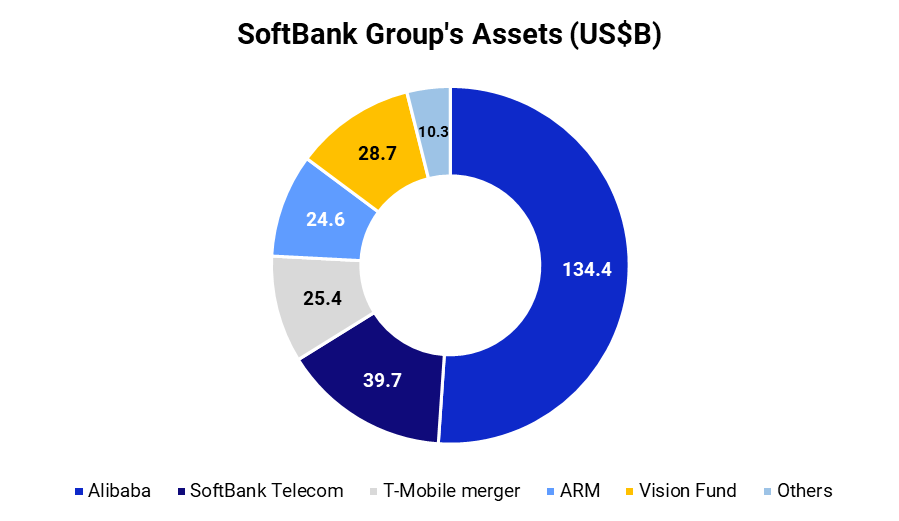 In addition to Alibaba, SoftBank Group derives a significant portion of its asset value from SoftBank Telecom and its stake in Sprint Telecom in the US, which has now merged with T-Mobile. The Tokyo-headquartered conglomerate also has a direct stake in satellite broadband operator OneWeb, which filed for bankruptcy last month.

It’s SoftBank Vision Fund’s (SVF) investments that are generating the majority of negative press and headaches for Son. On Monday, SoftBank Group said that it expects a US$16.7 billion loss on SVF and a US$7.4 billion loss on other investments, including WeWork and OneWeb, in the financial year ended March 2020.

SVF has direct stakes in the group’s other troubled investments such as Oyo. This means that most of the damage from Son’s recent investment missteps has largely been borne by SVF investors and Son’s personal reputation rather than SoftBank Group’s actual asset value. The company’s inherent asset value has been far less affected by these mistakes, even if the general stock market decline has hurt Softbank Group’s share price.

Nevertheless, because of all the bad publicity and uncertainty about what could come next, SoftBank Group’s share price trades at a deep discount to the sum of all its assets. This means that the shares would be worth far more if the conglomerate were liquidated into separate individual companies and Son didn’t make new risky investments.

As shown below, the company’s share price is estimated to be trading at a 60% discount versus the net sum of its assets based on recent market prices and data from SoftBank Group’s last earnings announcement. This means that if its shares would simply reflect the value of its underlying assets, they could rally by about 150%. Put another way, if Son stepped down and announced that he would liquidate Softbank Group, then its shares could rally 150% just to reflect the value of what investors would receive in distribution.

To be clear, SoftBank Group has traded below the value of its assets by some discount for a long time already, which can be common for many conglomerates listed on the stock market. Such companies usually trade at some discount to their assets.

However, the collapse of Son’s bullish bets has resulted in substantial share price volatility for SoftBank Group, making it trade at a deeper discount to the sum of its assets than should normally be the case even for a listed conglomerate. Investors are increasingly concerned over its debt, with Standard & Poor’s cutting the company’s credit rating outlook to negative.

Hence, it makes sense that activist investors such as Elliott Management Corp. have been pressuring Son to do less vision-based investing and more old-fashioned monetization. This has led SoftBank Group to announce a US$41 billion asset sale aimed at funding a share buyback and slashing debt.

The company’s shares rose sharply on the news and could likely climb higher if it announced further asset sales to buy back shares so that its investors can finally realize its asset value as cash.

While Son seems to be moving away from dicey investments, having canceled a further US$3 billion investment in WeWork earlier this month, SoftBank shares might better off right now if he simply stepped down. It seems that market concern about his penchant for uber-bullish failed investments is hurting share price, as the company is worth far less than it should be relative to the sum of its assets.

Thus if Son steps down, the company’s shares would likely go up substantially, given how deeply they trade to their net asset value. While this seems an extreme measure, it isn’t when one considers how the founders of Uber, Google and Microsoft have taken on less active executive roles, and the companies later thrived as a result.

The market seems to want less risk-taking from SoftBank Group right now, so it wouldn’t be too crazy if Son took a backseat for a bit. Stepping down could be in shareholders’ interest because if the market doesn’t need to worry about new aggressive investments from the company, then its stock could rally.