Oyo Hotels & Homes reported this week that its losses have jumped sixfold in the year ended March 2019, adding to the worrying signs that another company backed by Masayoshi Son’s SoftBank Group is looking vulnerable – just like WeWork, the US office-sharing firm that ran into financial trouble last year.

The Indian hospitality startup is undoubtedly a success story, having achieved a US$10 billion valuation after raising US$3.2 billion of capital in just six years, according to data from Crunchbase. However, it appears that a bold growth strategy may have been pushed too far, perhaps partially because of the Japanese billionaire’s grandiose goals.

During a meeting with Oyo’s management in March 2019, Son’s well-documented zeal for taking wild risks was sparked after seeing the startup’s goal of securing 1 million rooms within a year, Bloomberg reported recently. The target was jotted down on a whiteboard, and the SoftBank CEO got people to literally sign off on it – everyone affixed their signatures underneath the word “BINDING” written in all caps.

Anecdotes such as this make it no surprise that Oyo’s recently released financials paint a picture of a company brashly spending cash. Even though the company reported a 450% increase in revenue to US$951 million in the fiscal year ending March 2019, it sank deeper into the red as losses jumped over 600% to US$335 million.

Oyo’s international businesses accounted for 75% of the losses, most of it coming from China. Launching in a new country may at times require some cash burn, but forking out a quarter of a billion dollars in an untested market within just a year is a major bet. Moreover, keep in mind that while Oyo has just released financial figures, they’re for the year to March 2019 – that’s data from nearly one year ago. Given the news reports about Chinese hotel owners not being paid what they were promised and Oyo’s massive retrenchment exercise, it’s fair to expect that the year ending March 2020 could be similarly loss-making.

If FY 2020 will also be unprofitable considering Oyo’s early troubles and the negative impact of Covid-19 – the disease caused by the novel coronavirus identified last year in Wuhan, China – on travel and tourism, then back-of-the-envelope math suggests a cumulative loss of US$722 million over the last three years ending March 2020.

This rough estimate is based on the assumption Oyo will post the same amount of net loss for this year as last year, reflecting massive cumulative cash burn. Note that an estimate for the year to March 2021 – a period where Covid-19 could negatively affect Oyo’s business – also isn’t included. Source: Zero One estimates, assuming Oyo will incur the same level of losses in FY2020 as FY2019

Despite Oyo’s mounting losses, it has been ambitiously expanding. Last year, it acquired the European vacation homes business Leisure Group for around US$415 million, pledged to invest a further US$335 million in the holiday rental space, and earmarked US$300 million for its US expansion. Such commitments may force Oyo to raise more cash, and when it does, the company’s valuation will likely take a significant hit – just like how WeWork’s valuation plunged last year.

WeWork and Oyo’s round valuation histories are shown below. Notice the similar spike in valuation that both companies experienced from around 2017 to 2019. 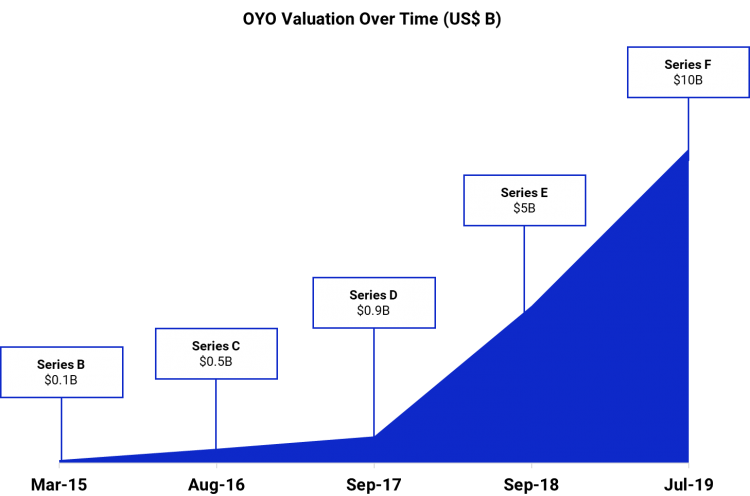 The company’s rapid expansion mentality may have served it well during a period of easy money for startups of its kind and a favorable economic environment.

With the unprecedented spread of Covid-19, a traveler-dependent business like Oyo burning hundreds of millions of dollars a year is definitely at risk of needing more cash. And when that happens, it could be at a lower valuation than its last US$10 billion benchmark.

As shown in the valuation chart above, Oyo was valued at less than a billion dollars in September 2017. Thus the question is, was US$9 billion of additional business value created between that period and today?

To put Oyo’s last US$10 billion valuation in perspective, one can buy the Accor, a publicly listed hospitality company that owns a portfolio of well-known hotel brands, for a similar US$11 billion valuation – the French firm’s current market capitalization in the stock market. While Accor is not a tech startup, it’s an asset-light company that’s profitable and cash generative.

While startups operate scalable businesses that “sell the dream” to get massive future valuations from venture capital firms and private equity investors, Oyo’s dream seems harder to sell these days.

It’s quite telling that in Oyo’s last funding round, Sequoia Capital and Lightspeed Venture Partners sold down their stakes, earning mega returns at 20x to 50x returns by some reports. Sequoia reportedly sold two-thirds of its position while Lightspeed sold down half of its stake. Perhaps these firms realized that Oyo’s valuation was topping out.

The most likely path forward for Oyo is to keep cutting costs and build a more sustainable business. While it has established a formidable company in many respects, reducing spending and canceling investment plans also means lowering growth expectations. That again makes Oyo’s last US$10 billion valuation seem lofty, and the risk of an upcoming WeWork-style “down round” is high.