Does this $133m bet on biodegradable ‘plastic’ hold water?

Around 1.4 trillion – that’s the amount of single-use plastic straws Singapore-based startup RWDC Industries is aiming to replace by 2025. Straws made from its bioplastic raw material called Solon can biodegrade in two months – a mere fraction of the 200 years that polypropylene plastic straws take to decay and be absorbed by the environment.

Producing and incinerating traditional plastic also results in the emission of greenhouse gases on a massive scale. In comparison, Solon-based products leave behind no harmful by-products after they decompose, according to RWDC.

“As Solon is made from entirely renewable resources, every ton of plastic we replace will be preventing the corresponding release of methane or carbon dioxide into the atmosphere,” says RWDC co-founder and executive chairman Roland Wee.

Solon is a type of polyhydroxyalkanoate or PHA, a polymer that’s fully biodegradable in soil, and water, leaving no toxic residue. Apart from straws, Solon can be used in a wide range of everyday consumer goods, including cups, plates, and drink lids.

“Some people describe PHA as biodegradable, as it sounds very sexy, but scientists call it a thermopolymer. That means it is easy to degrade and melt,” explains Henry Leung, senior lecturer at the School of Chemical and Life Sciences in Nanyang Polytechnic (NYP). Week-by-week comparison of how a Solon-made straw disintegrates in an industrial compost / Photo credit: RWDC

In June 2019, Solon made its debut at the Ecosperity Week in Singapore in the form of straws. RWDC says that “roughly a dozen clients” are now testing its products, and the straws will soon be available in several leading food and beverage outlets in the city-state.

The company declined to reveal its clients due to confidentiality agreements but said they’re “large global brand owners” and “multinational companies.”

RWDC tells Tech in Asia that the firm’s new US$260 million plant in Athens, Georgia will be operational by the third quarter of this year. The US-based facility can initially produce about four kilotons of Solon per year, but output will be ramped up by over 80 times to 350 kilotons by 2025. The company also plans to build more plants in Asia to meet growing demand.

“We have designed our PHA production systems as 25 kiloton modules that can be quickly installed at locations that are defined to be strategic to best serve our customers,” adds Wee.

The company will also hire 200 more employees at its Georgia headquarters to support its “24/7 operations” and to fill needs for research, engineering, and business development. A RWDC technician at its plant in Athens, Georgia / Photo credit: RWDC

RWDC’s expansion plans come after its US$133 million series B in May. The round was co-led by Vickers Venture Partners, energy and resources firm Flint Hills Resources, and Swiss pension fund CPV/CAP Pensionskasse Coop.

A 2018 financial report indicates that RWDC had largely been investing in research and hadn’t reported any revenue as of yet. The company confirms this, saying that its focus to date has been on research and development, although it recorded some revenue from collaborations with clients in 2019. Wee tells Tech in Asia that he expects RWDC to be profitable in late 2021, when its first full-scale production module goes online. Wee and Georgia-based Daniel Carraway formed RWDC in 2015, coming up with the company name by combining their initials. They set their sights on solving a growing global crisis: our dangerous dependency on single-use plastics.

But RWDC isn’t Carraway’s first foray into the plastics business. In 2005, he founded Danimer Scientific, a company that makes compostable polymers like PHA. Carraway eventually sold the firm in 2014 for undisclosed reasons.

Apart from helping ease the world’s reliance on single-use plastics, RWDC upcycles waste products such as used cooking oil to mitigate environmental problems. The company uses bacteria to convert the oil into PHA resin at its Athens plant. It sources the used cooking oil through an unnamed collection firm, which gathers it from restaurants and industrial food preparation facilities in nearby city Atlanta.

Explaining the production process, Wee says that RWDC’s microbes break down carbon in the used cooking oil into PHA, then stores it as an energy source. After a few days of fermenting, the substance is extracted from the bacteria before it’s purified to be sold to clients. The firm claims its production plant has “zero waste,” as it even recycles all the water used. “We convert 100% of the used cooking oil to biomass, and 80% of that is PHA,” shares Wee. That translates to about 0.8 litres of Solon generated from a litre of used cooking oil. The other 20% of the biomass – or organic matter that can be used as fuel – doesn’t go to waste, as it is also sold to other companies that use it as animal feed, fuel, or compost, he adds.

Yield or the environment?

From an environmental standpoint, it’s important that all byproducts of RWDC’s production process are reused, according to NYP’s Leung.

He notes that one of the biggest challenges for startups like RWDC happens during the extraction phase. “They aim for yield to impress companies to buy into their tech. [As a result,] they forget about environmental factors, like wastage.”

Leung previously worked on a project to make PHA from used coffee grounds, but faced resistance from companies during the pitching process due to his methods, which prioritized environmental impact over yield.

“But for companies, they would never sacrifice yield, even resorting to using additional heavy processes to extract that extra 1% to 2% of yield – taking it to the point where the power usage is almost comparable to that of producing traditional plastics. That defeats the environmental purpose of such projects,” contends Leung.

The price needs to be acceptable, too.

Jan Ravenstijn, an independent biopolymer consultant and veteran of mass industrial polymer makers DSM and Dow, agrees with Leung. “The name of the plastics game is high yields and low cost. But as much as the environment is important, the price needs to be acceptable, too.”

RWDC declined to reveal its price point or margins for Solon but said it’s sold at a “market-acceptable price range.”

Wee tells Tech in Asia that his firm is the “first company to manufacture PHA at an industrial scale and at an affordable price,” though Ravenstijn disagrees with that claim.

Based on his calculations, Ravenstijn estimates that Solon needs to be sold at less than US$4,000 per ton to be competitive. But he points out that traditional plastics, such as those in food packaging food are sold for much less by the ton. “Manufacturers are not ready to pay two to three times more to switch to a substitute, regardless of its eco-friendliness.”

According to Argus Media, used cooking oil hovered at around US$690 a ton in April, with prices normally fluctuating between US$600 to US$700 a ton. At face value, this would mean that RWDC is increasing the commodity’s value by over five times. But this figure doesn’t factor in larger expenditures in equipment, research, and operating costs.

Ravenstijn also questions if RWDC is the first such company to produce PHA by the kilotons. “There are already competitors in the PHA space that have been operating on an industrial scale since late 2019. On top of that, they have been selling out already,” he says.

In Japan, Kaneka Corporation completed construction of a new plant to boost the production capacity of its polymer product in December 2019. It increased its output fivefold to around five kilotons per annum.

Closer to RWDC’s plant in Georgia, Carraway’s former company Danimer Scientific also opened its first commercial PHA plant in Kentucky last November, with a production capacity of 10 kilotons. In comparison, RWDC’s plant in Athens aims to produce four kilotons of Solon annually by the end of 2020.

RWDC declined to comment further, saying instead that it has “overcome all barriers to industrial scale production of PHA, making the right qualities, quantities, and types of PHA at the right price.”

Speaking of Solon’s quality, Leung is also concerned about its purity, saying that it may not be able to fully serve as a “drop-in replacement” for the many uses of traditional plastic like the company says.

“Different applications of plastic call for different requirements of PHA. PHA isn’t known for giving very good physical strength, hence, it may be a reach to say it could replace heavy-duty plastics,” he observes. “Achieving high purity would mean extra equipment and costs to further distill the product.”

Fellow academic Ravenstijn expressed a similar doubt. “PHA can’t be used to replace polystyrene as their polymer structures are vastly different. Manufacturing companies that turn plastic into items would need to recalibrate existing equipment at much [higher] costs.”

Responding to the scientists’ concerns, RWDC says that while Solon can’t replace plastics in probiotics packaging or outdoor furniture, it remains “ideal” as a drop-in replacement for single-use plastics use, such as straws and plates.

“New machinery is not required. In fact, existing machinery can be operated with lower energy consumption when replacing polystyrene with PHA,” Wee says.

Due to the variety of plastics in the market, PHA can’t replace them all, but it will likely work best for certain applications, such as coffee cup film liners, says Circulate Capital founder and CEO Rob Kaplan.

Circulate Capital launched a US$106 million venture capital fund dedicated to solving Asia’s plastic crisis. It received backing from conglomerates such as PepsiCo, Procter & Gamble, Dow, Danone and Unilever. The firm has just invested a total of US$6 million into two plastic recycling companies in India.

In the broader plastics alternative industry, other startups have been making waves, including Australia-based Varden, which converts the waste material from sugarcane into biodegradable coffee pods that will replace those made from plastic. 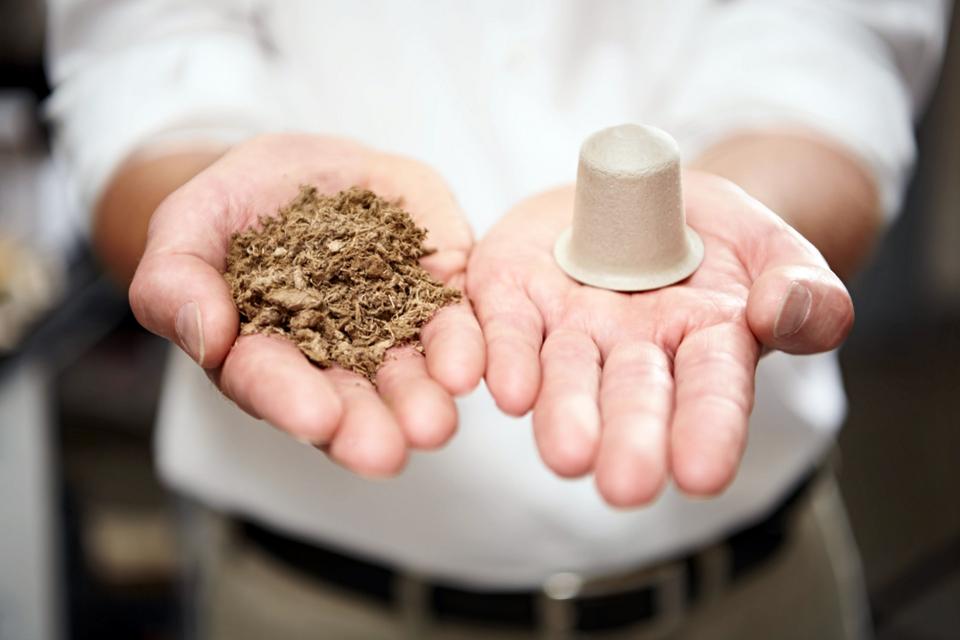 The whole plastic-replacement platform is in its embryonic stage.

When it comes to getting manufacturers to make the switch, producers of alternative plastic have much to contend with, besides product purity, strength, and most importantly, price. But as concerns mount over the environmental damage caused by pollutants from plastic, the push to replace them with more sustainable materials has gained momentum.

It has also led longtime advocates like Ravenstijn to call for greater support from the public, governments, and corporations to help “turn the tables” on single-use plastics. He thinks demand for PHAs have finally outpaced supply, and firms like RWDC and Kaneka need all the help they can get.

“The whole PHA platform is in its embryonic stage. It’s slowly maturing. But what we need now is for legislators not to be a nuisance, and for them to be a facilitator,” he adds. RWDC’s Wee also recognizes that a sudden switch to PHA isn’t possible, noting that it’s looking to take“baby steps” to change governments’ mindsets. Big corporations need a push as well. Soft drink giant Coca-Cola, for example, has shown reluctance to do away with single-use plastics, citing how “consumers still want them.”

For Coca-Cola, Wee suggests starting with small changes “Perhaps we can start with the bottle cap, rather than the bottle itself, as there is regulatory pressure on detachable plastic closures in jurisdictions like Europe.”

NYP faculty Leung is bullish on the alternative plastics sector, believing that it’s possible for the world to make large-scale changes given enough motivation.

“Solutions such as PHA may seem far-fetched, but if millions make the switch, a huge impact can easily be seen,” Leung says. “That would reset the clocks on plastics pollution, giving the Earth time to recover from this plastic pandemic.