Funding Societies raises $40m, but streamlines its business amid Covid-19

Funding Societies, a peer-to-peer lending platform targeting small and medium-sized enterprises, has shed 18% of its total workforce across its Singapore, Malaysia, and Indonesia offices, Tech in Asia has learned. It brings the total staff tally at the startup to more than 300 employees.

The layoffs, which took place at the end of March, were triggered by the Covid-19 pandemic and comes at a time when investor scrutiny on unprofitable startups has peaked. While the revenues of the Sequoia-backed firm haven’t yet been hit, it’s expecting further challenges ahead. The company is also looking to shore up its tech talent amid criticisms by former and current employees that the firm’s tech processes are problematic.

“It was a cost-cutting [measure] as a result of the uncertainty from Covid-19. At the same time, we took the opportunity to streamline the business,” co-founder and group CEO Kelvin Teo tells Tech in Asia. The company has also made changes to its operational plans, including shutting down products that weren’t profitable.

Corporate bankruptcies are set to rise in Singapore this year as the country heads toward its worst contraction in two decades. Analysts are forecasting that nonperforming loan ratios for the city-state’s two largest banks – DBS Bank and the Oversea-Chinese Banking Corporation – will increase to 1.8% this year from 1.5% in 2019, driven by the outbreak, according to Bloomberg.

As people and companies fall on hard times, microlending platforms such as Funding Societies are likely to be hit by a wave of loan defaults. However, no further layoffs are expected at the startup, Teo says. The firm had begun making the necessary adjustments in early February when Singapore raised its risk assessment of the pandemic to Dorscon Orange – the country’s second-highest alert level for diseases.

“We tried to do [the layoffs] early and ahead of the market,” Teo says, hoping that prompt action would give affected employees the best chance of finding a new job.

As things stand, the startup’s nonperforming loan rates – the measure of loans that have defaulted or are close to defaulting – have been steadily rising since 2017 and stood at 2.27% in 2019, public figures on its site show.

Teo declined to disclose the startup’s internal forecasts for 2020 but said that the firm is taking a “more careful approach” on credit. In Singapore and Malaysia, for instance, Funding Societies has reduced loan disbursement volume significantly.

An employee who was laid off in the startup’s Kuala Lumpur office tells Tech in Asia that the staff cuts have touched mainly junior members, but Teo says the exercise applied to employees across the board.

Founded in 2015, Funding Societies is headquartered in Singapore and operates under the Modalku brand in Indonesia. The archipelago is the startup’s largest market, accounting for more than 40% of its total loan volume.

In the last few years, the fintech company has grown fast. Last November, it hit a S$1 billion (US$707 million) milestone in total loans disbursed, which has risen to S$1.3 billion (US$939 million) as of April. 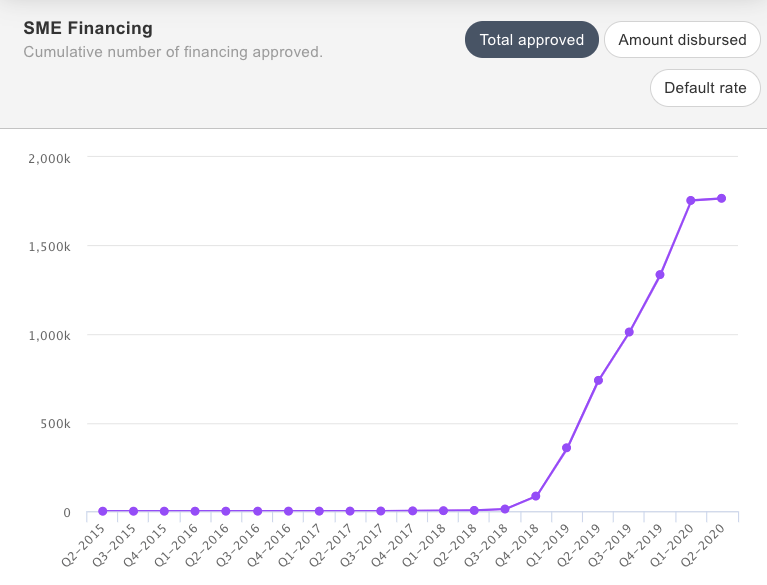 Such rapid growth has come at the expense of falling investment returns, however. The weighted average return rate, excluding nonperforming loans, was 9.8% in 2019, down from 16.2% in 2017, which the CEO attributes to economic headwinds. “Singapore went through a near-recession in 2019,” Teo justifies.

In February, Funding Societies had quietly raised a series C round, with US$40 million committed in equity. Its backers were a mix of new and existing investors as well as one bank, which the CEO declined to name.

“In hindsight, maybe we should have announced [the fundraise] early to avoid unnecessary anxiety,” Teo says candidly.

While the funds were initially intended to be invested in new initiatives, those plans have now been scaled down. The startup has also become a lot more selective of which new business areas it will put money behind.

In Indonesia, it has shut down a digital microfinancing product which was unprofitable, after experimenting with it for a year. “We realized that with Covid-19 on the horizon and with quite a bit of work we have to do to bring [the platform] to profitability, it wasn’t something that we could invest resources on,” Teo says.

However, the CEO clarifies that the company is prepared for a protracted market downturn, adding that it has successfully secured credit lines from financial institutions as well.

The Singapore-headquartered startup isn’t alone in its drive to optimize costs and manage risks during this crisis. Leading consumer lending platforms in Indonesia such as Akulaku, Kredivo, and UangTeman have similarly tightened their selection criteria for new clients seeking loans.

Akulaku, another Sequoia-backed company, laid off hundreds of employees at the start of April, affected staff told Tech in Asia this week.

At UangTeman, all employees have been asked to volunteer partial salary deferments or unpaid leave applications on a voluntary basis in place of compulsory cuts, chief executive Aidil Zulkifli announced in a LinkedIn post.

Teo, however, says Funding Societies’ Indonesian operations have seen a smaller impact than its Singapore and Malaysia businesses.

So far, the startup’s direct exposure to sectors that have been hit the hardest by the pandemic appears to be limited. As of April 2020, hospitality and F&B sectors collectively make up 16.4% of its total number of approved loans. 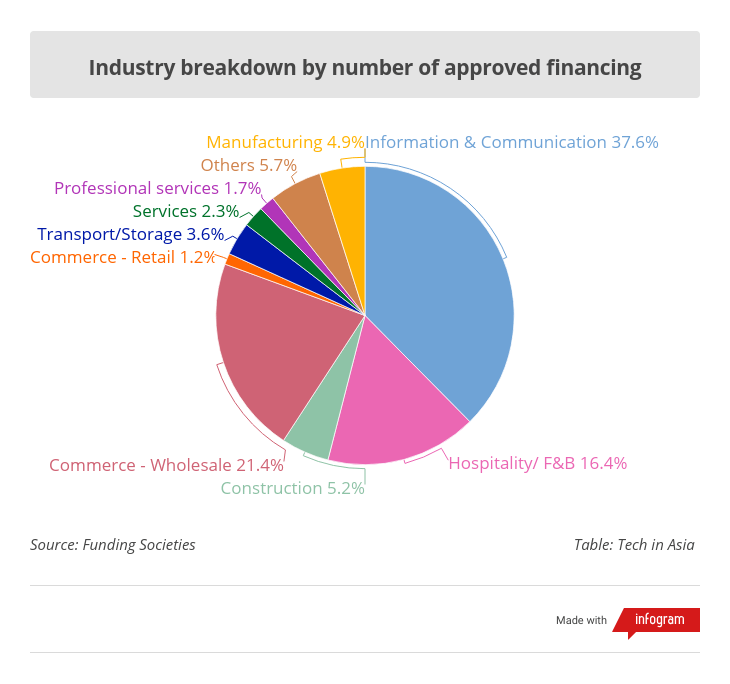 This is reflected in the minimal impact on overall default rates so far – which have increased from 1.05% from the fourth quarter of 2019 to 1.3% in the first quarter this year – but that might worsen with Singapore implementing enhanced social distancing measures and Malaysia in lockdown, Teo cautions.

With slower economic activity in the coming months, there will no doubt be an increase in repayment deferment requests from SMEs, Wong Kah Meng, the CEO of Funding Societies Malaysia, said in a report this month.

As of March 2020, approximately 10% of SME clients had requested for rescheduling of their repayments, he added.

‘All fin and no tech’

Despite the downsizing, the firm will continue to beef up hiring in areas including cybersecurity as well as senior roles in engineering and enterprise risk management.

“The genesis of the exercise was to drive toward profitability,” says Teo. “To that extent, we are still hiring but selectively in key areas which will set the company up for success. Some unicorns are laying off tech folks in Indonesia, and we’re hoping to shift some of our hiring over there.”

The startup’s plan to invest in tech staff could be a response to the persistent claims of employees that the company is “all fin and no tech.”

In January, a former employee wrote on the online jobs portal Glassdoor about how technology costs in the company were skyrocketing. “Mistakes that occur as a result of technology occur on a regular basis. [A] simple issue like keeping a record of the correct account balance for an investor is a challenge for this company,” the anonymous employee wrote. The review has since been removed.

Another employee who was affected by the recent layoffs confirms this.

A problematic company culture at Funding Societies, where employees were focused on developing “the next big thing” rather than maintaining tech products, had led to a deterioration of its tech processes, says an ex-staff member who spoke to Tech in Asia on the condition of anonymity. “So what happens is existing products and features become broken and unusable,” the employee notes.

In response to these claims, Teo says that it’s a common problem when a company has only one tech team serving operations in different areas. “Each country gets some of the automation but not all that they want,” he says.

With a presence in three countries, it’s also difficult for Funding Societies to automate its SME financing service because of “local nuances,” the CEO adds.

Some employees have even taken aim at the firm’s “poor quality of management” and “inexperienced leadership team”, Glassdoor reviews left by disgruntled ex-employees show.

Last year, the startup went through “a round of leadership build up,” a process Teo acknowledges he could have managed better. “We did make some poor calls in the process. Some of the senior industry hires turned out to be not fitting of our culture and that did cause a bit of frustration within the team and organization,” he admits.

Overall, however, the CEO remains “cautiously optimistic” about the current economic uncertainty. “We’re hoping for the best and preparing for the worst, and that’s why we took action so quickly, even to the extent of being seen as alarmist,” he says.