What Grab wants to achieve in Southeast Asia’s insurance sector is nothing short of a tall order: protect millions of families in Southeast Asia against life’s uncertainties, with simple, digital, and flexible services.

“We tailored these products to support our drivers in the worst-case scenario, [such as when] they’re unable to be on the road due to an accident or illness,” Tom Duncan, Grab’s head of insurance, tells Tech in Asia. 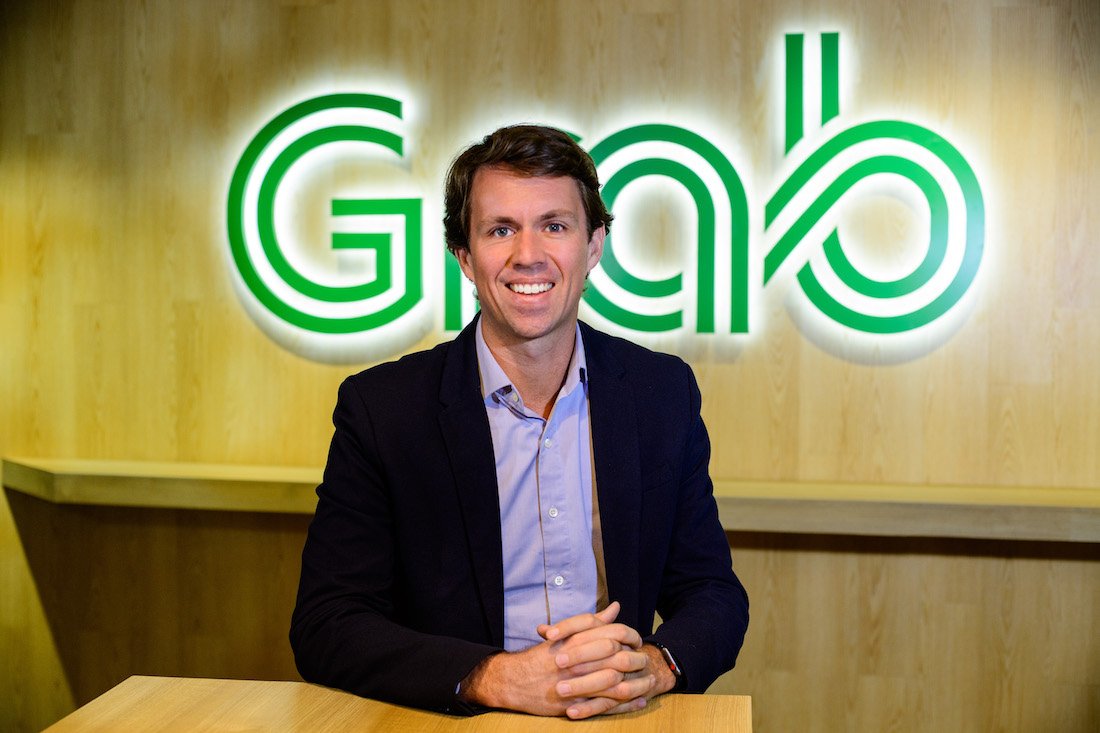 Duncan is in charge of GrabInsure, the super app’s digital insurance arm that was set up in April 2019. In the past year, GrabInsure has launched several microinsurance products in Singapore, Malaysia, and most recently, Indonesia. They range from personal accident and critical illness coverage to travel and e-hailing insurance.

Just shy of a year old, GrabInsure has issued over 7 million policies in Singapore and Malaysia. Its latest opt-in policies are in addition to free personal accident insurance coverage that Grab has been offering to its drivers and passengers since 2016.

What differentiates GrabInsure’s policies from existing plans in the market is how it charges premiums on a “per ride” or daily basis. Doing so makes it convenient for the millions of people who already use the app daily, whether for food deliveries, transport, or for employment.

Critically, GrabInsure’s microinsurance policies are low-cost in nature. “The major insurers are targeting a relatively small percentage of the population that has the income to pay for traditional high-premium products. What we see is a demand for more of the mass market, affordable, accessible health insurance,” Duncan explains. 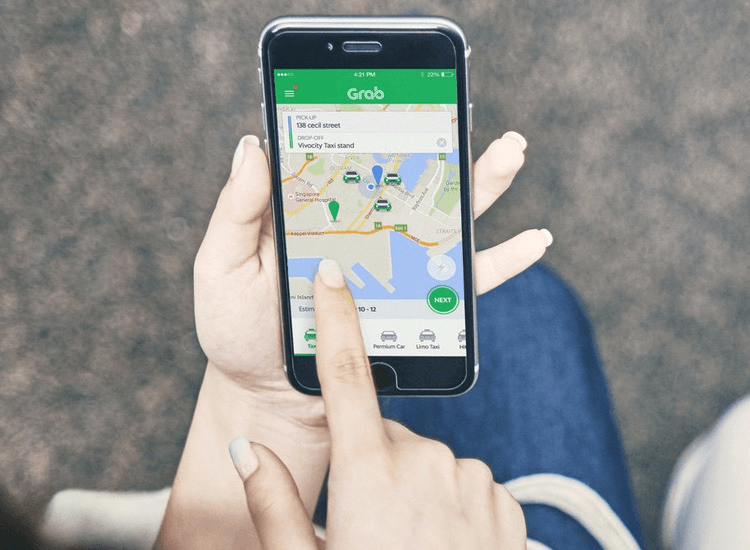 Being a super-app gives Grab multiple advantages over traditional insurance providers. The company has a customer base of over 185 million, serving over 9 million drivers and merchants or micro-entrepreneurs across Southeast Asia. Its digital wallet GrabPay supports in-app payments for more than 600,000 merchants, while policy issuance is facilitated by a joint venture withChinese digital insurance giant ZhongAn.

The partnership allows ZhongAn, which does not underwrite products outside of China, to tap into Grab’s ecosystem of users in Southeast Asia. Grab, on the other hand, can leverage ZhongAn’s technical assets and industry experience.

The super app taps into Zhong An’s Fusion system, which integrates with insurer systems via application programming interfaces (APIs) in real time, to launch insurance products rapidly. This allows Grab to provide scenario-based insurance, including bundling it with a ride at a very small premium or letting drivers activate auto insurance on demand.

The joint platform has proven crucial in facilitating Grab’s roll out of Covid-19 coverage, Duncan says. When frontline healthcare professionals expressed difficulties in getting rides to and from their workplace, Grab launched GrabCare, a dedicated transport service targeted at healthcare workers in Singapore, Duncan notes. The following week, GrabInsure released free Covid-19 coverage for driver-partners who had volunteered for the GrabCare scheme.

For segments of the economy unable to afford the hefty price tag for monthly or annual insurance plans, Grab’s focus on low-premium products is a potential game changer.

The company’s critical illness plan – a collaboration with NTUC Income – is aimed at Grab’s driver-partners and accrues premiums on a per-trip basis. That’s unlike regular insurance policies, which require insured persons to commit to a fixed premium sum over a period of time. 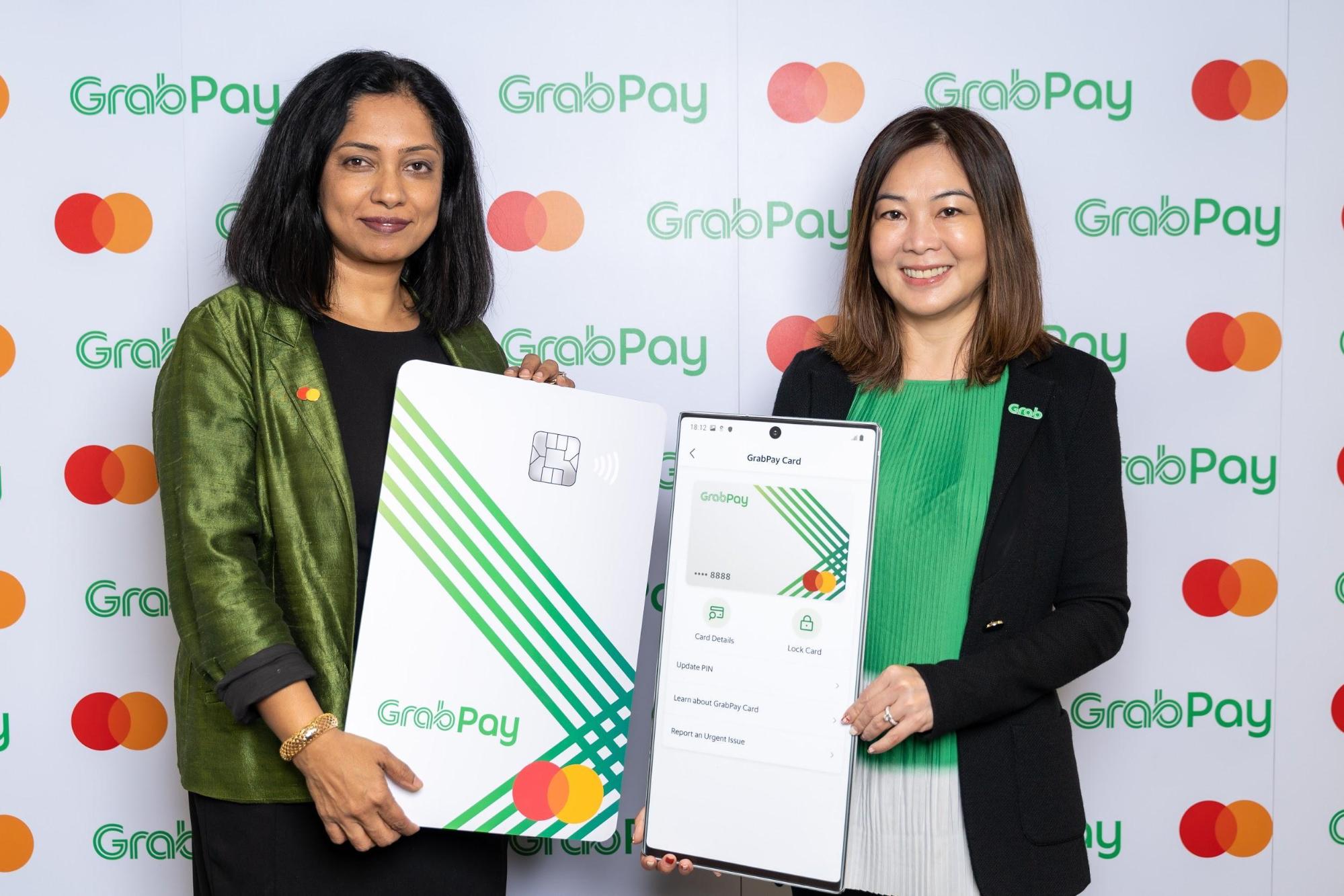 “As they drive, their cover builds up,” Duncan notes. The policy continues to cover these drivers-partners even beyond their employment with Grab.

In Malaysia, where e-hailing insurance is mandatory for drivers, GrabInsure provides daily coverage worth 1 to 2 ringgit (US$0.23 to US$0.45), a more affordable alternative to annual premium plans.

“Drivers can start building the cover by paying micropremiums rather than a lump sum, which can be a significant portion of their monthly income,” Duncan explains.

The company also offers travel insurance, underwritten by Chubb, which charges a daily rate ranging from S$2.50 to S$4.90 (US$1.70 to US$3.40), depending on travel destination. The product saw an uptake of 10,000 within its first month in Singapore, according to Grab.

Grab users can also get additional ride coverage for S$0.30 (US$0.20) per trip, which will cover accidents that take place while in transit as well as on delayed transport pickups. So far, “thousands of people” have opted into this coverage, Duncan says.

The super app is currently developing a similar product to give consumers coverage for late food deliveries, which it has tested with a few of its vendors. “We saw really good uptake and an increase in sales [for merchants] in double-digit percentages, when we offer that sort of a product that pays out if the food is delayed by 15 minutes,” Duncan adds.

Alibaba-affiliate Ant Financial, which serves 900 million people in China annually, has a community-based product in China that effectively crowdfunds payouts to the critically ill. It’s targeted at low income individuals who are unable to afford regular health coverage. 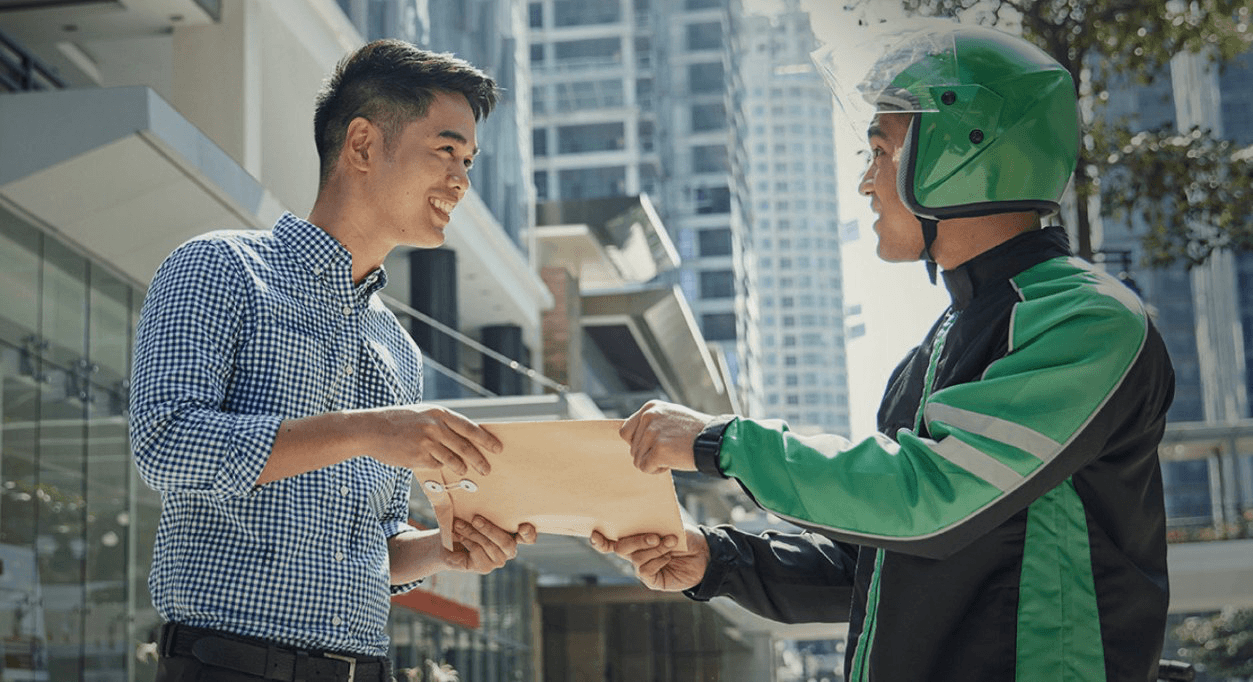 Called Xiang Hu Bao or “mutual protection,” the plan effectively provides free health coverage to members and is popular among rural communities in China. Ant doesn’t charge people who sign up and doesn’t require members to pay premiums. Instead, members collective pool together the payout sum when another member falls ill.

It’s a clever play on numbers that gives much-needed insurance coverage for millions who might not be able to afford it, yet keeps costs low – no more than 0.1 yuan (US$0.01) for every critically ill person, Ant said in a statement. In November 2019, just over a year after it was launched, the platform had registered 100 million users.

Duncan did not reveal if Grab would be introducing something similar down the line, but said that Grab was “studying different options […] including what’s happening in China.”

Insurance for the masses

In markets such as Indonesia, Thailand, and Malaysia, more than 85% of retail insurance customers, particularly the young and digitally savvy ones, are open to buying policies from new providers, including retailers, automakers, or technology firms, a Bain & Company survey found. 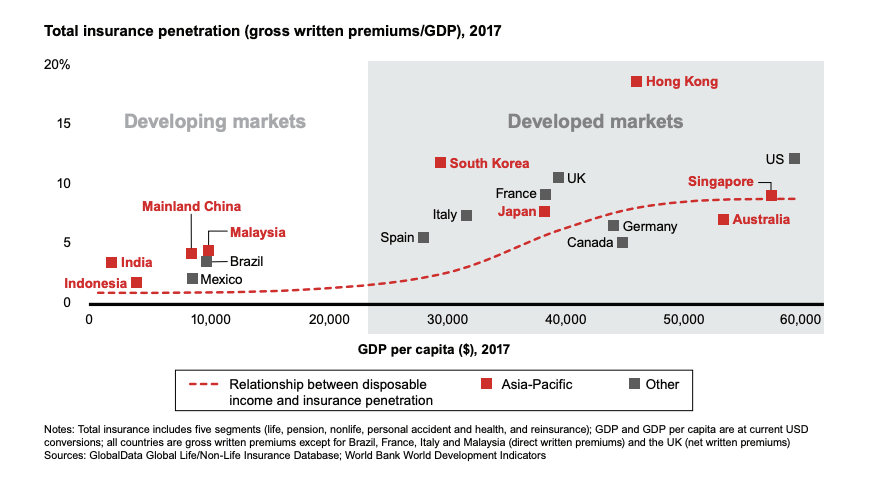 “There’s a real unmet demand for health insurance in Indonesia,” Duncan observes. In the archipelago, the life insurance penetration rate, which is measured as gross written premiums as a percentage of per-capita gross domestic product, is 2%. In contrast, that figure is almost 10% in Singapore, according to Bain & Company.

“When you look at all the other markets that Grab operates in [outside of Singapore], the accessibility and affordability of insurance is far lower. It’s far less likely that someone would have an existing insurance product that could cover them,” Duncan adds.

The low insurance penetration rate presents a huge opportunity in a market like Indonesia, where the inconveniences faced by users extend beyond delayed food deliveries or ride arrivals. Although gross written life insurance premiums grew at 11% annually from 2013 to 2017 in the country, consumer awareness of the value of insurance remains low, the same report stated.

GrabInsure’s next target market for its personal accident product is Indonesia, where it serves over five million microentrepreneurs, including drivers as well as food and beverage merchants. It already offers health insurance plans for Grab users in Indonesia.

“All of the insurers realize that microinsurance or more flexible, affordable products are necessary, but it’s hard to [implement] micropremiums if you only accept credit cards or cash,” Duncan points out, who was part of the pioneer team at Chubb Digital.

Because of that, Grab’s payments capabilities, which supports GrabPay and Ovo – the super app’s digital wallet operator partner in Indonesia – will be a key differentiator.

At present, GrabInsure’s policyholders are mostly Grab drivers. “Both our critical illness and also that daily auto insurance product in Malaysia accounting for a large portion of those policies,” Duncan says.

What started as microinsurance for its driver-partners, however, is gradually expanding to encompass Grab’s broader ecosystem of users and their families. Among Grab’s policyholders in Indonesia, the ratio of insured people to each driver is 1.8 – an interesting metric, suggesting that many have purchased insurance coverage for family members as well. 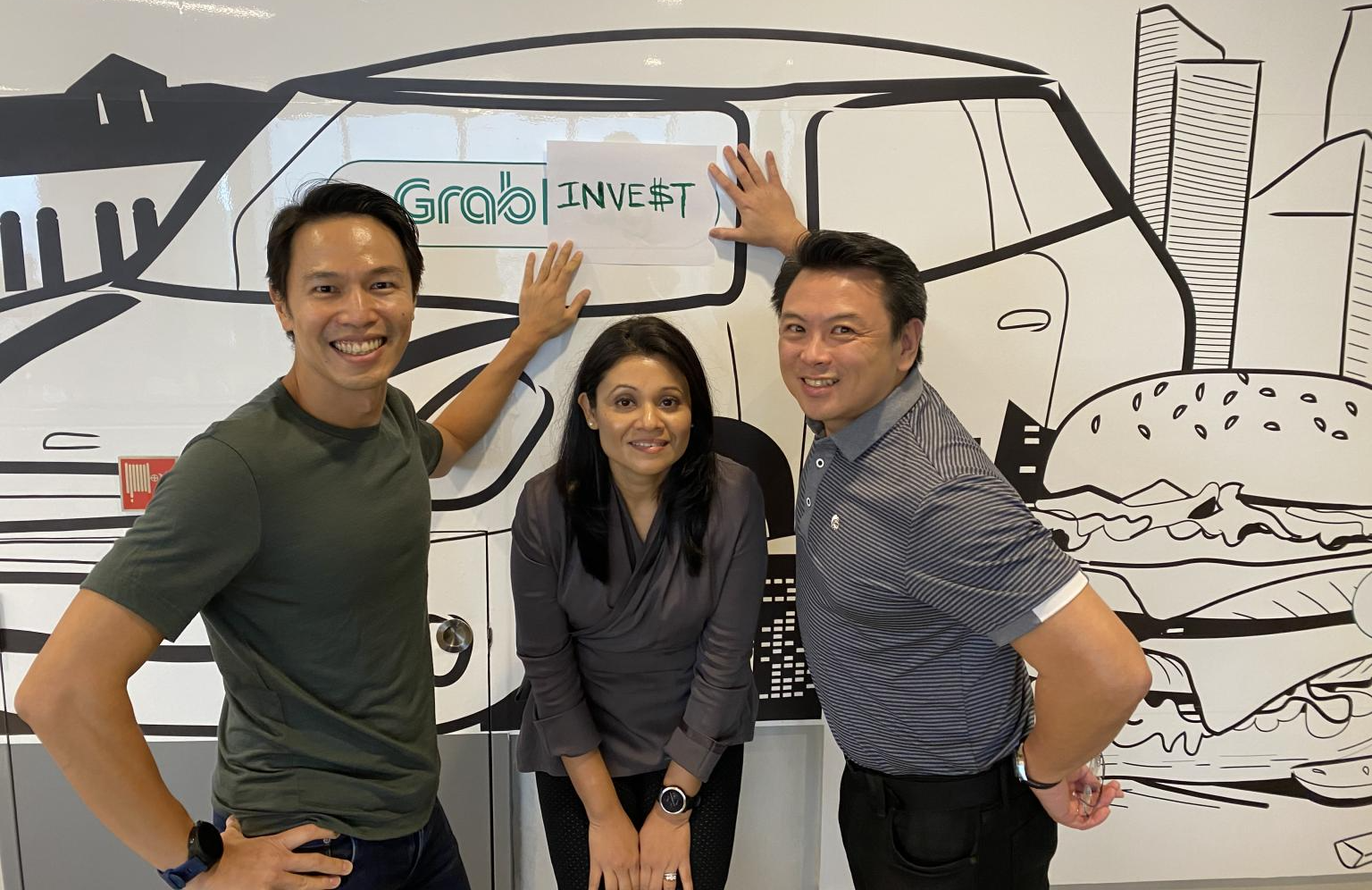 As Grab extends its reach into financial services, including a joint bid with Singtel for a full digital banking license in Singapore and newly established a wealth management arm, its users in the city-state may soon have access to more modular services customized to their needs.

“If people want to add some form of life coverage [to their investment products], they could potentially add on or layer on a life insurance product,” Duncan explains.