How Ninja Van is powering cross-border ecommerce beyond deliveries

When Chang Wen Lai founded Ninja Van as a last-mile delivery solution for his own menswear brand in 2014, he never imagined he would be helming one of Southeast Asia’s largest logistics startups. “Our plan was to have 20 drivers and call it a day,” the former Barclays trader quips.

Today, the express logistics startup has grown far beyond the 5,000 parcels it was delivering daily in 2015, processing a million packages a day on average across six Southeast Asian markets. With its latest capital injection of US$279 million, Ninja Van is turning its attention to the millions of microentrepreneurs and small businesses in the region. The company is expanding its first and last-mile logistics offering upstream to include overseas procurement, escrow services, and cross-border shipping services while building its business-to-business (B2B) service in Malaysia.

Lai declined to disclose the startup’s latest financials but says it has “never failed to more than double its revenue” every year. The company clocked around US$9.5 million in revenue in the six-month period between January and June 2017, regulatory filings show. Assuming an annual growth multiple was 2x at the minimum, the estimated topline was at least US$76 million in 2019. Ninja Van, however, didn’t comment on the projected sum.

Southeast Asia is seeing a boom in online sellers, many of whom are tapping into various ecommerce marketplaces. Increasingly, however, they’re building their branding on social media and directly selling products to their followers.

Ninja Direct, the service which has seen “triple-digit growth” since its launch in Indonesia in the second half of last year, is an area that the startup will heavily invest in, Lai says. It plans to roll out the service in Malaysia next.

“What’s interesting is that a lot of small and medium-sized businesses (SMEs) are not selling domestically-produced consumer products but imported ones,” he observes. “We want to enable that whole business. Focus on engaging your customers, choosing products that suit your brand, marketing, and the whole consumer experience, but let us take care of everything on the back-end.”

As brands wean off their dependence on ecommerce marketplaces such as Shopee, Lazada, and Tokopedia – all Ninja Van clients – and diversify to other platforms, an end-to-end logistics service provider that can help with sourcing and procurement, warehousing, and transportation, could be an alluring choice for these brands.

“The opportunity is with the sellers – the smaller ones in particular, who don’t have the scale to drive economics,” says Kuo-Yi Lim, managing partner at Monk’s Hill Ventures, a returning investor in Ninja Van’s series D round. For microentrepreneurs, sourcing and procuring goods from overseas are not without hurdles. Doing so personally is time-consuming, and moving products back to their home countries manually – i.e., via suitcases – is a laborious process that’s hard to scale.

Cross-border payments add another layer of complexity, and that’s only the beginning. “After you pay, how do you ensure that the person will ship out your products? After [the seller] agrees to give it to you, who is there to receive it in the country and how are you going to ship it back?” Lai asks.

Ninja Van isn’t the only company that’s eyeing this space. Companies that help online sellers such as Temasek-backed fashion company Zilingo and Canadian ecommerce platform Shopify have sprouted up in recent years.

Zilingo has pivoted into a supply chain company of sorts, offering fashion retailers and factories a variety of tools from procurement, inventory management, to financing – a proposition that has drawn significant investor interest.

Meanwhile, Shopify, which helps sellers build and manage their online presence through a webpage, has met with limited success in Southeast Asia, which it entered in 2013. That could be because unlike the US or in Europe, a lot of customer engagement in the region happens on social platforms, Lai notes.

For most brand owners in Southeast Asia, the biggest pain point isn’t in customer engagement. Instead, it’s supply chain and logistics.

Ninja Direct builds on all of Ninja Van’s strengths: a pan-regional network where it claims to have “100% coverage” and a domestic logistics service. These factors, however, work in Ninja Van’s favor.

By consolidating parcel volumes from the “thousands” of SMEs and smaller merchants selling through direct-to-consumer channels, Ninja Direct negotiates with freight forwarders to get better freight rates for these clients. “There’s no market that exists for a 30 kilogram to 100 kilogram shipment that’s affordable and traceable. You either ship by container or parcel. There isn’t really an in-between,” Lai explains.

What’s “gig” about the gig economy?

Ninja Van operates a hub-and-spoke logistics network in which products from various locations are consolidated at a central distribution center before being shipped out to their final destinations. That’s unlike players such as Lalamove and GoGoVan, which use a point-to-point model that directly connects buyers and sellers.

While both Hong Kong-based companies have aggressively pursued asset-light models by relying on freelance workers to keep costs low, Ninja Van employed a different model from the onset.

Most of Ninja Van’s 30,000 employees are delivery staff, and “a fair bit” of them work full-time. It generally does not employ gig economy workers, “We employ someone gainfully for the entire day, [someone for whom] Ninja Van [contributes] a majority of earnings,” he adds.

One reason for that is because at current delivery volumes, base load requirements are best served by people who “know they’re well-taken cared of, are experienced at their job, and tech-enabled,” Lai said in an interview in February.

Lai’s perspective is a departure from the prevalent practice of informal peer-to-peer arrangements, which have propelled the rise of companies like Airbnb and Uber. Neither startup owns their core selling point: real estate listings for short-term rental and cars that provide ride-hailing services in most of its markets, respectively.

“If you dig a bit deeper, you realize that [many of] these gig economies are not “gig” – a majority of these workers are full time,” Lai says. “What’s gig about it?”

“The biggest fallacy here is that people can be commoditized,” he points out. “If you commoditize them completely, you lose […] what holds people together – the camaraderie and relationships. As long as you’re a company that runs on a lot of humans, you cannot lose that human element,” Lai adds. So how does Ninja Van manage its massive workforce?

The startup employs a mix of monetary and community-driven incentives that differ from market to market. In Singapore, its delivery driver pool is highly incentive-driven and relatively more efficient – routes are optimized and drivers get a payout for each delivery.

“In some other countries, what we focus a lot on is community,” Lai says. “We make drivers accountable to each other. We put pools of incentives for drivers which then are shared as a team. It incentivizes them to solve problems on the ground and [this] drives the performance as a group,” Lai explains.

Events such as “rider nights” celebrate their achievements alongside the country’s milestones.

As Ninja Van grew, it got its fair share of complaints and unhappy customers.

The startup’s Facebook page is riddled with comments from frustrated customers over the lack of visibility on the status of their packages, late deliveries, and unresponsive customer support, just to name a few.

To address such concerns, Ninja Van is focusing on developing more comprehensive customer relationship management systems and introducing automation in that process. Lai is confident that a combination of chatbot and live-agent support as well as WhatsApp and Facebook messaging channels will improve the overall customer experience.

“There will always be unhappy customers [and] parcels that fall through the cracks. Our big focus is that [on] all of these issues, you’ll only get unhappy with us once,” Lai says.

From day one, the startup has been focused on serving businesses – and businesses alone. That’s going to remain so. “We help businesses with their consumers, but we’ll never step into the [consumer] space because we respect that the customers are theirs,” Lai stresses.

Ninja Van plans to strengthen its B2B service, which it piloted in Malaysia last December and is growing at a 50% rate month-on-month. At present, it targets SMEs as well as firms in the financial services and pharmaceutical sectors.

While financial institutions are “the biggest users of translational document services,” Lai says there aren’t any solutions aimed at improving the document management supply chain.” He adds that increasing digital penetration in the relatively untapped pharmaceutical space can bring about a “final-mile medicine delivery opportunity.” 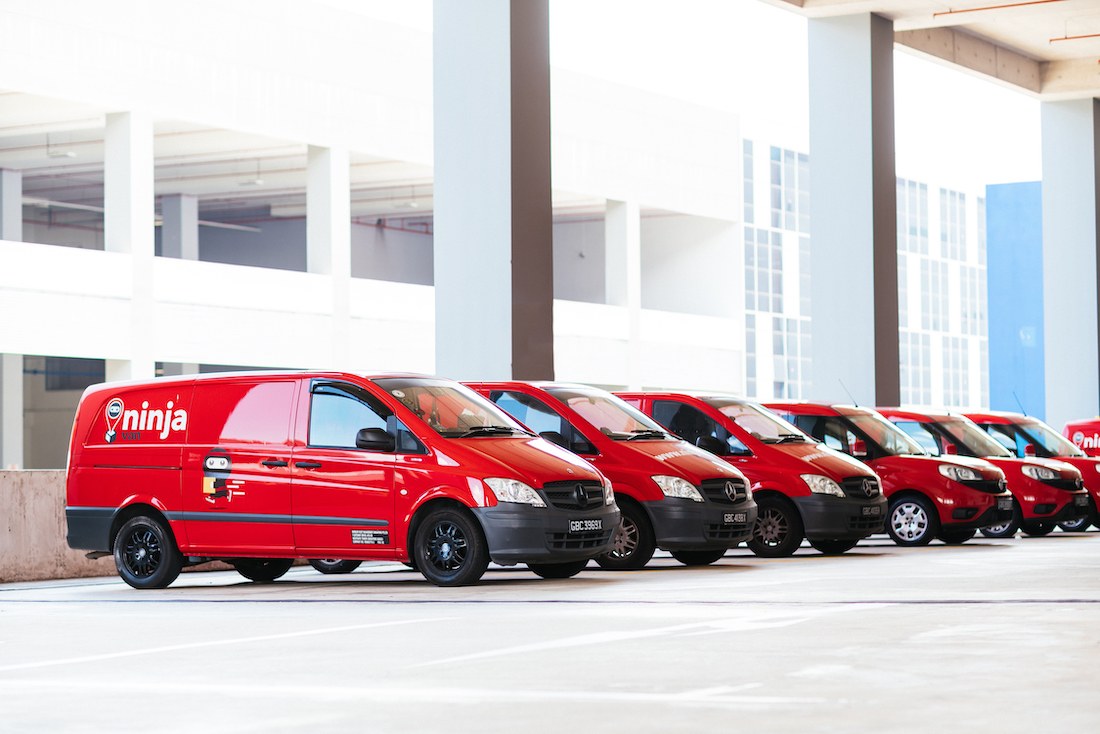 The participation of Zamrud, Brunei’s sovereign wealth fund, in the recent fundraise, has sparked speculation about the Ninja Van’s plans in the country. Lai says the startup is currently working on “stabilizing its operations” in Brunei.

While Covid-19 has stalled growth in the past two to three months, things are now “picking up significantly again,” Lai says. Delivery volumes have increased 10% to 19% since the start of the pandemic. The startup continues to battle decreased operational efficiency and productivity due to social distancing measures, but Lai is optimistic about its medium-term prospects.

While Ninja Van is profitable in three of its markets, Lai did not specify when he expects the entire company to turn fully profitable. That will probably come as Ninja Van achieves greater scale.

“Logistics is a scale business: the more scale you have, the more efficient you are, the better margins and the service you can offer. That allows you to capture more value [and] will naturally lead to more margins and more profitability,” says Lim of Monk’s Hill Ventures.