When Stoqo, an Indonesian food logistics startup, announced its shutdown last week, it was widely seen as the first tech casualty of Covid-19 in the country.

But while Covid-19 did play a part, there were more complex reasons behind its demise. The company had banked on closing a series B fundraise, which would have provided it with a lifeline, but the pandemic’s impact on its revenue and customer base was “too significant, too fast.” 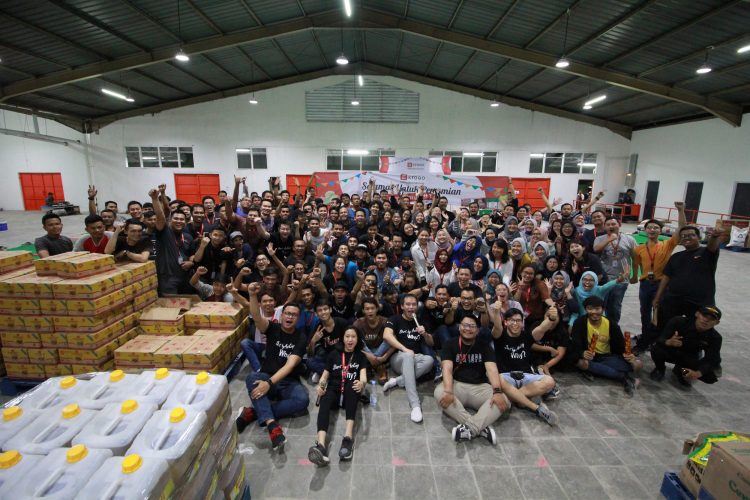 Meanwhile, employees were informed of the move just one day before Stoqo was due to halt operations. They also had to grapple with a lack of transparency and “messy” communication from the company’s leadership team.

Ultimately, closing down seems like the right thing to do, though some wonder if – with a little foresight – Stoqo could have been saved.

In a letter sent to employees that Tech in Asia read, Stoqo co-founder and CEO Aswin Andrison explained how the shutdown “was not an easy decision to make” and highlighted the “significant revenue drop” that resulted in cash flow challenges.

“We have tried every possible option, but as [the days] passed by, our situation became worse, not better,” he wrote.

Founded in 2017, Stoqo sells ingredients and other supplies – anything from garlic and ginger to instant coffee and detergent – to food and beverage (F&B) establishments through its platform.

Its customer base primarily consists of small and medium-sized F&B establishments. The company had targeted larger restaurant chains in its early days, but it has since shifted away from that strategy, an ex-staff tells Tech in Asia. Customer testimonials on Stoqo’s website include remarks from a Mexican taco joint and a third-wave coffee shop as well as school canteens and smaller wartegs that cater to blue-collar workers.

The change in approach appears to have made Stoqo especially vulnerable to a crisis like Covid-19, which has made the “tight cash flow” of the business “untenable,” according to a person with knowledge of the matter. “The company is no longer in a position to operate further at this stage,” the source adds.

But in conversations with Tech in Asia, several current and former employees contended that while Covid-19 was a factor, there were other things at play – so much so that the closure didn’t come as a complete shock. Even though there were no formal indications from management aside from the announcement itself, employees had sensed that there was something going on.

A series B fundraise, for instance, had proven difficult. Employees say Stoqo started the process in mid-2019, but no investments were completed until the shutdown. Before this, the company had raised two rounds of investment from backers like Alpha JWC Ventures, Insignia Venture Partners, and Monk’s Hill Ventures. 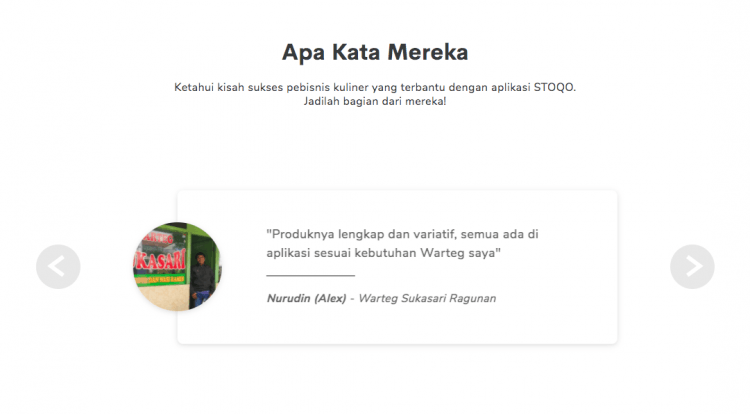 A customer testimonial on Stoqo’s website: “The products are complete and varied – everything my warteg needs is on the app.” / Photo credit: Tech in Asia

Clinching the series B would have helped Stoqo survive. One employee recalls how a team leader who has since left the company remarked that without the series B, the impact on Stoqo’s business would be “huge.”

The current investment climate also seems to have contributed to Stoqo’s fundraising woes. The process was first hampered by the WeWork debacle and then by Covid-19, suggests another employee.

A source close to the company says that if the pandemic didn’t happen, then the company would have likely had “sufficient runway” to raise the additional funding.

But other sources also point out that Stoqo’s business performance had been declining even before sweeping social restrictions to curb Covid-19 were implemented in Jakarta on April 10. One of them claims that the company’s gross merchandise value (GMV) had been trending downwards over the past six months, while another says that the number of daily orders and deliveries had consistently dropped since February 2020.

One source close to the company says the GMV claim is “factually incorrect,” adding that Stoqo’s “performance was healthy, with revenues steadily increasing until February 2020,” and it was on track to be unit-economics positive by April 2020. But business was impacted by the Jakarta floods in January, and in such a short time, Covid-19 “significantly” hit the company’s revenues to a point where it had no option but to stop operations.

According to an employee, the short-term reason behind declining orders was quality issues, which in turn pulled down the number of repeat orders. Stoqo had also increased the minimum basket size needed to qualify for free deliveries.

But looking at the big picture, there seems to have been a more fundamental problem. Based on this source’s own observation, the company’s process was “too fancy” for its business model.

For example, Stoqo supplied customers with various ingredients including chili peppers, which it ordered by the ton on a daily basis. Workers then sorted the chili peppers according to the company’s specifications, but the employee notes the standards it applied were too high.

“The chili peppers’ shape has to be straight, not skewed,” the source says. “Often, we had to dispose of stock keeping units (SKUs) that were deemed to be a ‘waste’ when they were still perfectly fine for consumption.”

Typically, when distributing fresh produce like fruits and vegetables, the best or grade-A items are supplied to supermarkets. Grade-B or even grade-C items, which may have certain imperfections or deformities but are otherwise fit for consumption, are sent to F&B companies. These items are cheaper as well – it would be more expensive for a restaurant to buy supplies from a supermarket, with its retail prices.

Meanwhile, the employee says that Stoqo’s customers rarely complained about pricing. It appears that the company was selling premium produce at grade-B or grade-C prices, which didn’t leave much profit margins. 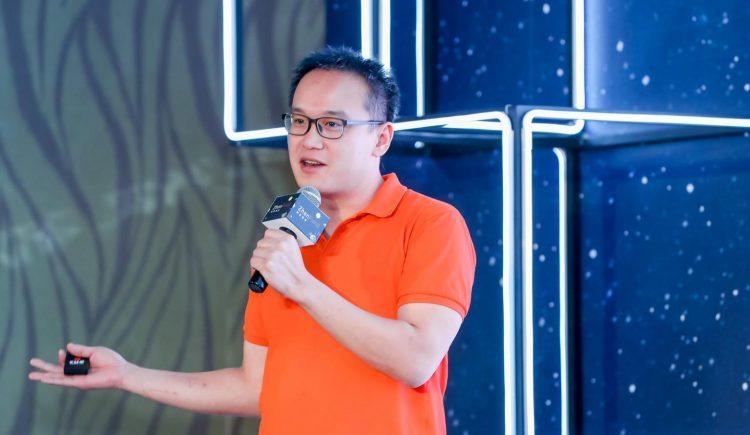 Ultimately, Stoqo’s clients did not seem to demand such premium quality.

“There was one day when we were pressed for time, so we didn’t do any sorting and just directly repackaged the chili peppers and sent them to customers,” says the source. “We didn’t receive any complaints that day.”

But a person close to the company disputes this account, citing that since Stoqo was a startup, it underwent several “iterations to find best product-market fit and positive unit economics.” Another employee says that he “believes in the business model” and claims that any leftover goods could have been sold to a third-party reseller at a lower price.

Yet another former Stoqo staff suggests that there were other issues with the company’s processes, and its troubles were also rooted in the management, company culture, and “growing pains.” Employees that Tech in Asia spoke to almost unanimously praised Stoqo’s culture in its early days, though things changed as it scaled to a company with close to 300 employees.

“I think as the company grew bigger and there’s more pressure for growth, certain ways of working and operating had to change as well,” says the ex-employee. “For sure, there were things that changed for the better, but some changes were not as favorable.”

Asked about Andrison, staff say that he is smart, self-driven, and enjoys mentoring his employees. But when the CEO was busy with tasks like fundraising, he delegated some tasks to middle managers without giving them clear direction, which resulted in decisions like purchasing too many slow-moving goods. Meanwhile, when he was not occupied, he had a tendency to micromanage team leads.

“There were times where you were already given [the] trust to lead a team, but sometimes it got interrupted without much context or even discussion,” says a former employee. “Leaders get bypassed.”

Ultimately, Stoqo employees who spoke to Tech in Asia agree that all things considered, closing shop was the best decision to make.

“If I put myself in the CEO’s shoes, I would probably do the same, honestly,” says an ex-staff. “You can’t keep burning money.”

“I think if you’re shutting down during Covid-19, the faster you do it, the better,” says another.

Angky William, Stoqo’s co-founder and CTO, also agrees. “I believe that the decision was the right call given the very unfortunate circumstances,” he said in a statement provided to Tech in Asia.

However, the way Stoqo’s shutdown was communicated internally left a lot to be desired, sources say.

Andrison had first made the announcement to the entire company on April 21 – just one day before the last day of operations. An employee says the human resources team, which would play an important role in the coming days, was briefed on April 20.

However, when the news was initially shared with the public through Stoqo’s website and app, the company said it was shutting down “temporarily” because of large-scale social restrictions in Jakarta. This inconsistency caused confusion among employees, compounded by the rumors that had started swirling around, including from people outside the company.

A source familiar with the matter, though, claims that this was an “unfortunate” clerical error that was fixed within hours.

In a town hall meeting on April 24, Andrison said the company was holding one-on-one sessions with every employee from April 27 to April 30. During those talks, employees would be presented with two choices: stay with Stoqo but face an uncertain future or voluntarily tender their resignation and (as a goodwill gesture from the company) be eligible for a “farewell package.”

Compared to the severance package that a laid-off worker would get under Indonesian law, the farewell money was of a “significantly” smaller sum, according to one employee. But it still included the customary Hari Raya bonus, and a source close to the company affirms that everything was done properly from a legal standpoint. 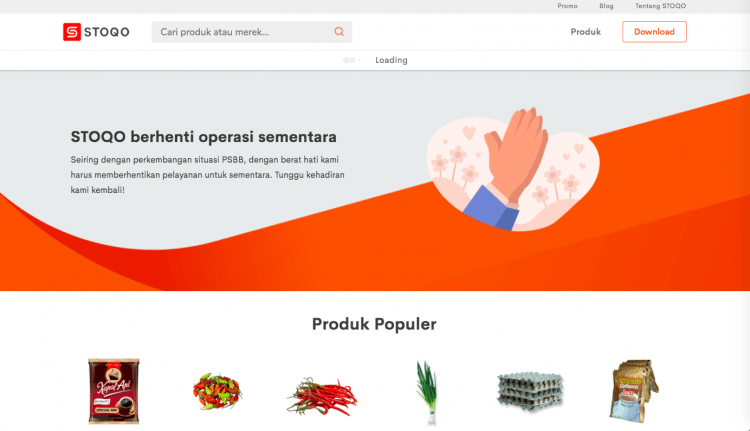 A screenshot of Stoqo’s website, showing the initial message about a “temporary” shutdown / Photo credit: Tech in Asia

Another staffer highlighted outstanding bills from Stoqo’s outsourcing partners – if these vendors don’t get paid, they might withhold wages from their employees, who are primarily warehouse workers. But the source close to the company says that such bills will be settled.

Still, some wonder if more could have been done earlier had the leadership been more transparent, especially since social distancing measures at the country’s capital have been a boon for grocery delivery companies. An employee says Stoqo attempted a pivot to business-to-consumer (B2C) in early April, but it was “too late” and done with “suboptimal effort.”

A source close to Stoqo says the company needed more time to figure out the unit economics as well as lead generation and customer acquisition strategies for the B2C pivot. At the same time, revenues were already “declining significantly.”

Another employee says that around late March or early April, the company’s HR team had been instructed to calculate overall people costs – i.e., salary, Hari Raya bonus, and others – with an intention to cut salaries. But that plan was never implemented.

Even now, mid-level managers and other higher-ups would be willing to take a pay cut if it meant helping Stoqo survive, a staffer says. “I am confident that around 65% to 75% of employees are willing to help [voluntarily] if it was clear and transparent from the start what the situation was. Why was the decision made to directly shut down?”

In a statement provided to Tech in Asia, Andrison says that the speed and magnitude of Covid-19’s impact on Stoqo’s business were unforeseen. He added that there were “many learnings for me from this failure,” such as being better at communicating with employees.

“We could have been more decisive about shutting down our business operations to give our employees two to three more weeks to process,” he said. “I truly apologize for not being able to deliver on our vision.”