Is Disney finding India’s Hotstar too hot to handle?

In the 1934 animated Disney classic The Big Bad Wolf, a pig warns Little Red Riding Hood, “Better to be safe than sorry. Shortcuts are not always good.”

Over eight decades later, the pig’s advice may come in handy for Disney. 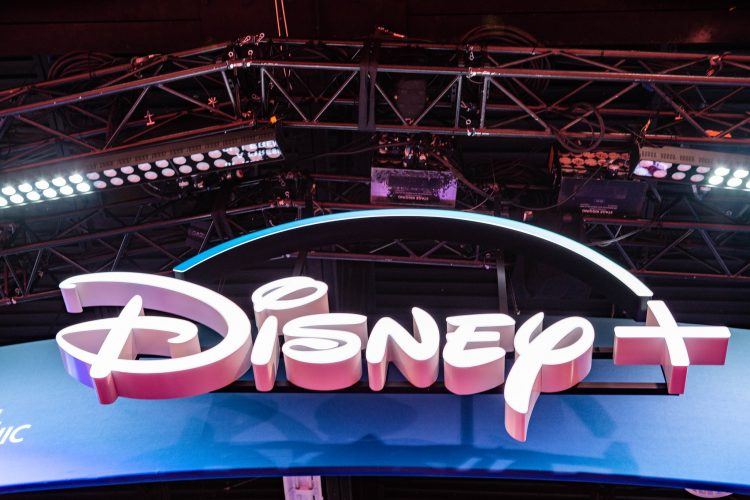 The iconic US media firm took control of Hotstar as part of its US$71 billion purchase of 21st Century Fox in March 2019. But a year later, clashes between the companies’ executives on everything from content and strategy to culture are getting in the way of Disney’s vision for a “transformative era”, several people tell Tech in Asia. These struggles are also putting profitability at risk, they say.

Both companies did not respond to requests for comment.

Apart from creating a content production powerhouse, the deal gives Disney access to multiple distribution channels across the globe, such as over-the-top (OTT) streaming service Hotstar. A subsidiary of Fox’s Star India, Hotstar brings in millions of viewers from the world’s second-most populous country. Its content programming and choices, however, leave a lot to be desired from Disney’s perspective, the sources point out.

Hotstar still features risque shows to keep up with competitors like Voot, which streams Naagin, a popular fantasy thriller about shape shifting serpent women. The show’s full-bosomed lead star wears a bustier that’s a size small for her frame.

“Disney won’t be caught dead with that image,” says a former senior executive at Hotstar, referring to how the empire that Mickey Mouse built zealously protects its family-friendly reputation. As such, Hotstar is now addressing some of these issues.

Though Disney is known as a process-oriented company, Hotstar has stuck to the aggressive and play-as-you-go culture that it inherited from Star India, the sources observe. For example, Disney is known to commission market and audience studies, do previews, and check feedback before investing and going ahead with series or movies.

In comparison, initiatives at Hotstar are driven by its senior leadership’s gut feel, according to sources Tech in Asia spoke to. Rollouts are often done ad hoc, and strategy pivots are common when things go awry. The company culture is particularly fraught because millions have been invested and time is running out due to intense competition, they add.

Hotstar dominates India’s crowded video-streaming market, thanks to its lead over rivals. That’s despite a drop in downloads: The Indian Premier League (IPL), a money-spinning cricket juggernaut with a fanatical following in the country, has been postponed indefinitely because of Covid-19. 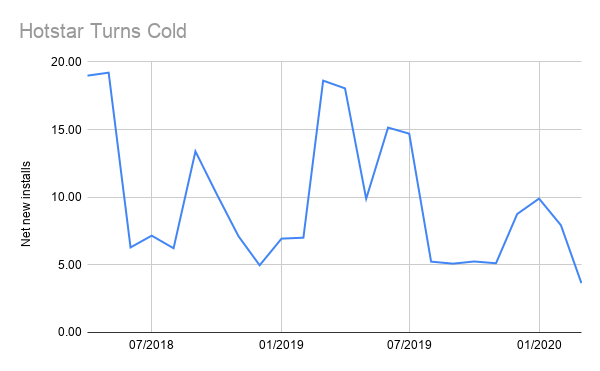 Most of its viewers signed up because of the IPL. Hotstar got the rights in 2017 to stream games globally after its parent Star India paid US$2.55 billion for broadcast and streaming rights through 2022.

That helped Hotstar notch a world record for simultaneously streaming to 25.3 million users for the quarter that ended in June 2019, said Disney in an earnings call. Monthly users averaged more than 300 million from April to June last year, the company added.

But that success came at a price.

Star India’s about US$60 million loss for the June 2019-ended quarter weighed on Disney’s earnings for the first time since the results of the two companies were consolidated. Star’s results were “well below our expectations,” Christine McCarthy, Disney’s chief financial officer, told analysts at the time. That loss has more than tripled for the whole of last year. 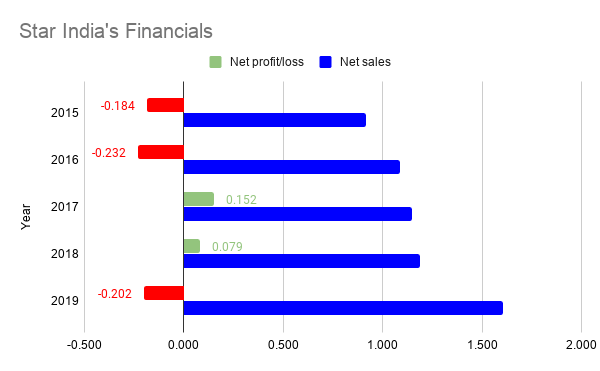 All numbers are in billions of US dollars
Source: AceEquity

The losses were mostly due to the cost of rights to the IPL and Cricket World Cup, she said. “Revenue growth was more than offset by the incremental rights expense,” she added. But the high cost of cricket content is unlikely to go away till 2022, say former and current Hotstar employees. An independent media analyst that Tech in Asia spoke to agrees with their assessment.

The price made sense at the time, when India was poised to be one of the fastest-growing economies in the world. But that changed after a series of policy missteps by the Indian government such as demonetization and a global economic slowdown.

Covid-19 has exacerbated the situation at Hotstar. Apart from putting the brakes on IPL, the production of new series and movies is also on hold because of India’s strict social distancing rules. This has hurt advertising revenue, according to sources, and there’s no clarity if insurance will cover the loss.

Dated content like reruns of movies, variety shows and family novellas aren’t helping the OTT streamer with new users, a current Hotstar employee says. More than half of the 4,000 plus streaming subscribers polled by Counterpoint Research in 2019 cited a lack of good and fresh content as a reason for unsubscribing.

Hotstar’s troubles come as global media majors slug it out in a winner-takes-all battle for eyeballs in a country with one of the world’s largest youth populations. The promise of conquering the Indian market and getting people hooked onto their service is prompting many players to throw caution to the wind and burn millions to generate or syndicate new content.

“Nearly 20% of the world’s population lives in India,” says Tristan Veale, an analyst at UK-based researcher Futuresource Consulting. An existing “strong” culture of video consumption and paying for TV presents a “huge” market opportunity, he says. That has been further stoked by cheap 4G plans from mobile network provider Jio, he adds.

Disney needs to quickly make the call on strategy for Hotstar to survive the battle, sources observe. While Disney would prefer focusing on subscriptions to reduce the vagaries of advertising spends, pivoting from an advertisement-led strategy is risky in an untested market, some Hotstar employees say.

Disney also needs to figure out how much it will spend in the country to compete against fellow heavyweights such as Amazon and Netflix, which are investing roughly US$700 million in total to create original and syndicated content. Amazon’s low US$13 annual fee, which in India covers the free shipping of products, also helped it gain 16 million Prime subscribers in 2019, estimates Futuresource.

These international firms are compelled to keep prices low due to the sheer glut of streaming platforms in a still nascent market. India has more than 40 providers vying for dominance, but none of them are profitable, according to Veale.

Though they’re not making money, many platforms have proliferated in the hopes that subscriber revenue will eventually pay for content costs.

Still in the woods

Apart from domestic rivals, Hotstar also faces competition from global tech titans. Before Star India doubled down on the IPL streaming rights, it had to fend off Facebook, which placed a bid of US$600 million in 2017.

The move was a “warning shot,” indicating that Facebook was “coming at sport,” media mogul Rupert Murdoch said in an interview to the Fox Business Network. And indeed, the social media behemoth has been steadily building its war chest to secure streaming rights to the world’s big-ticket sporting events. “Sports are inherently social, with the power to build and connect communities around the world,” Facebook’s head of sports said
in 2017.

Facebook also upped the ante by naming former Hotstar CEO Ajit Mohan as a vice-president and managing director for India. Mohan was a key member of the team that built the OTT company into a market leader, and many Hotstar executives have departed since then.

Notwithstanding the problems at Hotstar, Disney will have to fix them, given how India now accounts for 16% of Disney+ subscribers and how the numbers keep on growing.

India will have the third-highest number of streaming video-on-demand subscribers globally after China and the US by year-end, says Futuresource. The country is also expected to have 95 million such subscribers in 2023 from 11 million users in 2018.

Of the 50 million paying users for Disney+ five months into the launch, 8 million were from India, the company said on April 8. But it didn’t clarify how many of them were new and not existing Hotstar subscribers, according to some analysts.

Disney’s plans are relatively more affordable compared to its competitors. An all-in plan that gives access to Disney+ originals and latest U.S. shows from premium TV networks HBO and Showtime as well as broadcaster Fox costs US$20 a year in India. A limited content subscription costs US$5.24 annually.

YouTube and Amazon’s subscription plans start at around US$2 a month while Netflix charges about US$6.55. Apple charges US$1.30.

If Disney can sustain its pricing, it would be able to capitalize on Hotstar’s lead. Revenue from such services would be a little over half a trillion US dollars by 2022, marking a huge jump from US$30.4 billion in 2017, reports consulting firm PricewaterhouseCoopers (PwC).

Hotstar’s “compelling entertainment library” would help keep users loyal and reduce churn, says Futuresource’s Veale. Hosting Disney and Fox movies as well as exclusive streaming deals for India with HBO and Showtime should be a boost as well, he says.