Terence Lee and Thu Huong Le co-reported for this story.

Sy Phong Bui, founder and CEO of Telio, a business-to-business ecommerce marketplace in Vietnam that enables small retailers to procure goods from its web and mobile apps, is embroiled in an ongoing legal dispute with his former startup, according to two sources familiar with the matter and several internal documents seen by Tech in Asia.

The year-long legal spat pits Bui against his previous startup, OnOnPay. The fintech company’s board has accused him of breaching his fiduciary duties as its director by usurping its business opportunities and using its resources to develop Telio.

At the same time, Bui did not grant OnOnPay’s investors shares in the new startup despite supposedly saying that he would do so.

Bui’s lawyers have denied OnOnPay’s allegations, adding that it has no legal basis to claim any share in Telio.

“I am compliant with applicable laws,” said Bui in an email statement to Tech in Asia. However, he declined to comment on specific details as the lawsuit is ongoing.

On his Linkedin profile, Bui indicated that he had left OnOnPay in November 2018. But before that, he attended Alibaba’s eFounders Fellowship and drew inspiration for Telio at that leadership program.

In January 2019, Telio’s legal entity was set up in Singapore, according to a public filing, and it quickly became one of the most prominent young startups from Vietnam.

But OnOnPay’s directors insist that there wasn’t a clean break between his two stints. They claim to have consented to Telio’s development using OnOnPay’s resources, including its “employees, technology, know-how” as well as database of customers and merchants. Telio’s trial run was conducted on OnOnPay’s website.

The directors cited an expense report for OnOnPay sent by the chief operating officer, noting that the company had started to “run the wholesale reseller [business] since November 2018, which incurred the promotion cost to motivate merchants to use the product.”

Around the time Bui set up the new entity, he explained to OnOnPay’s shareholders that its purpose was to help him fundraise for Telio since the valuation for OnOnPay had “caused hesitation for the round to be closed,” Bui wrote in an email seen by Tech in Asia.

He envisioned that the new company would “empower 1.5 million mom and pop shops in Vietnam” and said that Telio had been launched in the “recent” 1.5 months. “The new entity’s cap table shall fully reflect OnOnPay’s current one, with a lower valuation as the investment into Telio is considered as seed funding,” he added.

Those shares never came, according to internal documents seen by us.

A public filing obtained by Tech in Asia in July 2020 shows that none of OnOnPay’s investors appear to be shareholders in Telio.

The next hot ticket

As 2019 wore on, Bui’s new startup began to attract interest: Telio became part of the first batch of companies at Surge, the accelerator program of venture capital firm Sequoia.

But talks between OnOnPay and Bui became a public disagreement. Captii Limited, the parent company of Captii Ventures – one of OnOnPay’s investors – published a notice dated September 6, saying that its board of directors had agreed to take legal action against Bui and Telio.

Accordingly, the case was filed between OOPA Pte Ltd, the holding company for OnOnPay’s Vietnam entity, against Bui in the High Court of Singapore on the same date that the note was released. OnOnPay demanded 100% of the shares in Telio’s Singapore entity.

“In initiating legal action, OOPA is taking steps to protect the company’s interests and ultimately those of its creditors and shareholders,” wrote Sai Kit Ng, Captii Ventures’ Southeast Asia head, in an email to Tech in Asia. Ng is also a director at OOPA.

Regardless, Telio’s fundraising continued unabated. Three months later, it bagged a US$25 million series A round led by Tiger Global, with participation from Sequoia India, GGV Capital, and RTP Global. Its valuation soared to US$100 million, according to an internal email, making it one of the most notable deals in Vietnam’s startup tech ecosystem last year.

As Telio’s new investors conducted due diligence, it’s unclear how much they knew about the legal conflict. Tech in Asia sought comment from two investors, but they declined.

Meanwhile, Telio was removed as a party to the lawsuit in April this year, leaving its founder as the sole defendant.

According to Ng, the move was done with the pledge that Telio would “take all necessary steps to abide by all rulings of the court” involving Bui.

Bui says that “there was no reason or basis to involve Telio or any of Telio’s investors” in the lawsuit. 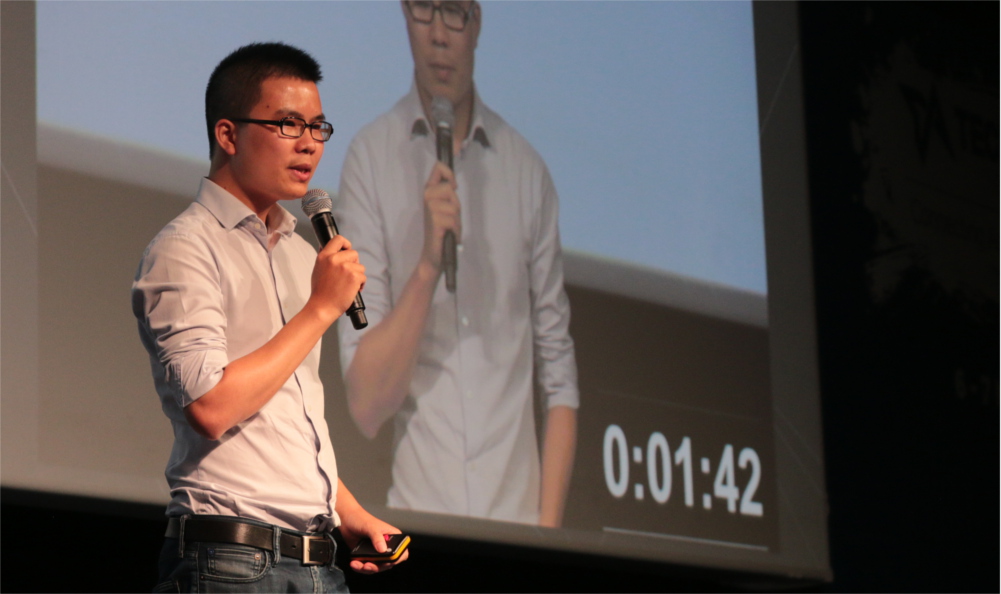 Bui is a familiar face in Vietnam’s tech ecosystem. He founded OnOnPay in 2014 as a mobile wallet and phone top-up startup to capitalize on the country’s smartphone boom. OnOnPay allowed users to top up their phones conveniently from mobile carriers in Vietnam in exchange for attractive offers like coupons or gift certificates.

OnOnPay went on to raise several rounds of funding, including a seed round from Captii Ventures in August 2015, a pre-Series A round led by Gobi Partners in November 2016 and an investment from Pegasus Tech Ventures in June 2018.

OnOnPay, however, would hit a major roadblock toward the end of 2018 after it failed to secure an e-wallet license from the State Bank of Vietnam (SBV), according to sources. OnOnPay is not on the list of all 35 non-bank institutions that have been licensed by SBV to provide payment intermediary service since 2015.

In a September 2019 letter, Bui’s lawyers denied that their client had breached his fiduciary duties, saying that OnOnPay investors were not interested in funding Telio “due to differences on valuation and terms.” They also pointed out that “OnOnPay clearly did not have the financial wherewithal” to invest in Telio.

Bui’s lawyers then posited that OnOnPay’s board of directors were aware that “Telio was incorporated and fully owned” by their client. Furthermore, OnOnPay was used for the “ulterior purpose of bringing illegitimate pressure against” Bui, and that “improper resolutions” were passed so that the fintech firm could enter into a loan agreement with its investors at an “excessive” interest rate of 24%. OnOnPay used to allow users to top up their phones conveniently from mobile carriers in Vietnam in exchange for attractive offers like coupons or gift certificates / Photo credit: OnOnPay screenshot

“There are no reasonable or probable grounds for the relevant directors to believe the [OnOnPay] will be able to repay the debt,” the letter said. The lawyers then denied that OnOnPay resources were used to develop Telio.

Ng disagrees that “improper resolutions” were passed. “All OOPA’s business decisions, including the said loan to OOPA signed in 2019, were made during board meetings that were properly held with resolutions passed by directors in accordance with the constitution of OOPA and the law,” he says.

In June 2020, Bui made a settlement offer to OnOnPay investors, but they rejected it, according to a source aware of the talks.

One of the sources says that the investors turned down the offer because they’ve put in a lot more money – US$2.3 million to be exact – in OnOnPay. The investors had also claimed 100% of the shares in Telio Lte Ltd, according to a court document dated January 2020.

Bui retained investors’ support and goodwill even when OnOnPay didn’t get the SBV license and ran out of cash, given that “it’s normal for entrepreneurs to pivot” business models when things don’t work out, the source adds. The investors even recommended and helped Bui to attend the eFounders program.

Ng declined to comment on the settlement offer because the lawsuit is ongoing. According to Bui, “the parties are heading to mediation soon.”

Gobi Partners, whose vice-president Kenneth Tan is an OnOnPay director, said in a statement to Tech in Asia that it would like to highlight the “importance of integrity and follow through on what is just and fair to all parties involved” as well as the “importance of corporate governance and duties of a startup founder.”

In such legal disputes, mediation or an out-of-court settlement is often the best outcome for both parties, according to a Singapore-based dispute resolution lawyer who opted to remain anonymous.

Either option would save on legal fees, and a voluntary settlement also reduces uncertainty.

“Singapore courts are aggressive about promoting mediation. They will send a letter to both parties’ lawyers to encourage them” to take up that option, the lawyer says. Refusing it could have an impact on costs to be awarded, as determined by the judge.

An out-of-court settlement may be preferable, anyway, because in assessing remedies, judges tend to favor awarding monetary compensation over a transfer of assets.

Also, without an existing contract obligation, the court can’t order or enforce non-compete or employment agreements between two parties, for example.

“With mediation, parties can agree to whatever they want. Courts can only go so far in terms of reliefs that they can order,” the lawyer explains. That said, a judge may order an asset to be transferred if it isn’t easily replaceable by cash – stocks in a private company may fall under this category.

If they do decide to leave it up to the judge, then a few factors will come into play.

Accountants will tell you that everything can be assessed.

Also, in cases where one party is claiming assets from another party, the judge must be convinced that both sides had entered into a contractual agreement to do so.

Unlike a signed contract, “it’s not as clear if an exchange of emails is enforceable,” the lawyer notes. “Was there an offer? Was there an unconditional acceptance? Are the terms certain and complete enough? Is the promise enforceable?”

Finally, determining the compensation for a lost business opportunity can be tricky, which is why experts can be brought in to help put a dollar value on it.

“Accountants will tell you that everything can be assessed with the right methods and assumptions,” the lawyer says.