Temasek is now a shareholder in ShopBack, the top cashback platform in Southeast Asia. The Singapore state fund is leading a US$30 million top-up to the US$45 million funding round the startup raised last year.

The money will fund ShopBack’s expansion into Asia and beyond its core cashback service.

The startup has now raised a total of US$113 million since its inception. The new funds will cushion it through a rough economy – which is impacting the retail and F&B industry. In the past two years, the company has extended into physical retail rewards via ShopBack Go with the goal of replacing paper loyalty cards.

It’s been diversifying beyond cashback, allowing users to discover new deals on the app. In Taiwan, users can even perform price comparisons, ShopBack CEO and co-founder Henry Chan tells Tech in Asia.

In 2018, the startup acquired Seedly, a financial media company for millennials.

It has also been investing in growth. In the financial year ending March 2019, it has increased both its top-line and bottom-line figures. Chan notes, though, that its business in Singapore is already profitable in terms of earnings before interest and tax (EBIT).

Data from public filings. Converted from Singapore dollars. US$1 = S$1.40

Revenue from its other markets, meanwhile, has been sufficient to cover local costs, he adds.

Commenting on the startup’s gross margins, Chan says that it’s more focused on “positive unit economics” at the moment. “We do look at margins. But margins at scale is more meaningful. At the end of the day, a revenue of US$10m to US$20m is nice but not sizable,” he explains.

The company is looking to expand the amount of sales flowing through its platform (or gross merchandise volume), which stood at US$2 billion in 2019.

Chan expects most of Shopback’s local operations to turn profitable within three to four years after they’re established. He declines to comment on financial numbers for the financial year ending March 2020. “We’re now trying to get to ‘ramen’ profitability,” he says.

The company is present in seven markets, including Southeast Asia’s largest countries as well as Taiwan and Australia.

In some of these markets, it’s finding itself bumping against stronger indirect competition. Fave, for example, offers cashback along with a slew of tools for SMEs. Grab has its own rewards program. 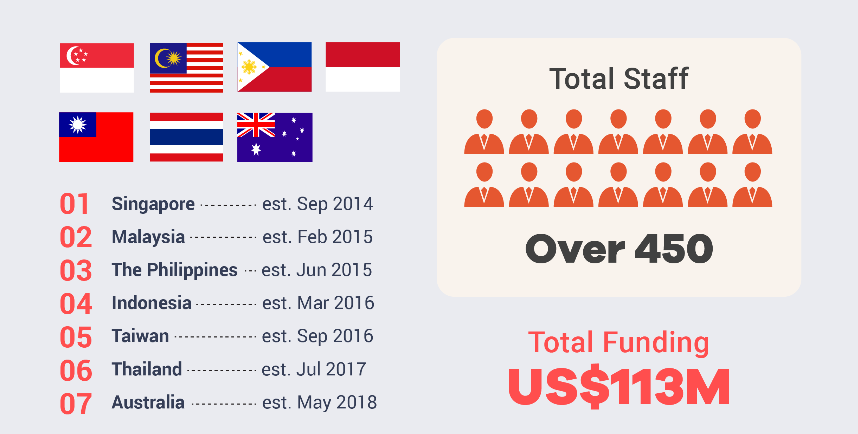 Right now, all except two of ShopBack’s markets are still in the aggressive expansion phase. Chan, however, says he’s “putting a mandate for them to breakeven now and shortcutting their growth.” The cashback business is turning self-sustaining, he believes.

Meanwhile, part of the losses has been going into new product lines that could become new revenue streams in the future.