Why some medtech products fail to take off, despite rising healthcare spending

The startup, when has been licensed by the city-state’s Agency for Science, Technology and Research (A*Star)’s commercialization arm to produce the Covid-19 test kits since February 14, is manufacturing enough kits for up to 100,000 tests weekly. These are sent to hospitals in its home market and China. But despite this recent foray, making such kits isn’t the company’s bread and butter.

The startup’s main business is creating blood-based diagnostic tests based on the analysis of microRNA (a type of nucleic acid) that’s secreted by tumor cells. Its flagship product is GastroClear, which was launched last October after eight years of development.

Singapore may have no shortage of technological infrastructure, talent, or governmental support, but a series of hurdles have hindered the widespread adoption of medtech products. Even if the technology is proven to be both effective and safe, setbacks such as the high cost of capital, distribution issues, or consumer perception tend to get in the way.

Mirxes is one of over 170 healthtech startups in Singapore. The company, which raised US$40 million in a series A round in 2018, is considered one of the better-funded medtech firms. For context, the total deal value in the healthtech sector was S$105 million (US$75 million) in the country that year. But the challenges in this space lie beyond obtaining funding.

GastroClear is an early-stage stomach cancer detection test and serves an alternative to invasive endoscopic procedures.

Mirxes claims that while GastroClear displays “superior performance” compared to other modes of detection, it’s been difficult to bring it into the market and scale in terms of adoption, sales and revenue, CEO Zhou Lihan tells Tech in Asia.

He declined to disclose the adoption rates of GastroClear in Singapore, where it’s available in Tan Tock Seng hospital and selected private companies, but he says a more representative number of the product’s success is the pickup it’s seen in China.

Mirxes has established partnerships with almost a hundred health-screening clinics in Asia’s largest economy, where more and more tests are being conducted. “We have seen the number scaling from 20 to 30 a week initially to hundreds per week subsequently,” Zhou shares.

The reason for its success in China is multifold. A higher incidence of cancer in China translates to more awareness about disease prevention and willingness to spend for medical screening, he explains. And unlike in Singapore, where people are used to paying for medical expenses via a national program called MediSave, it’s typical for Chinese citizens to pay for such services out of their own pockets.

But structural barriers related to distribution and purchasing policies can be problematic. “In China, distribution costs can be as much as 70% to 80% of the final customer price,” Zhou says. “In the US, the percentage is a lot more attractive towards the innovator that developed the test.” 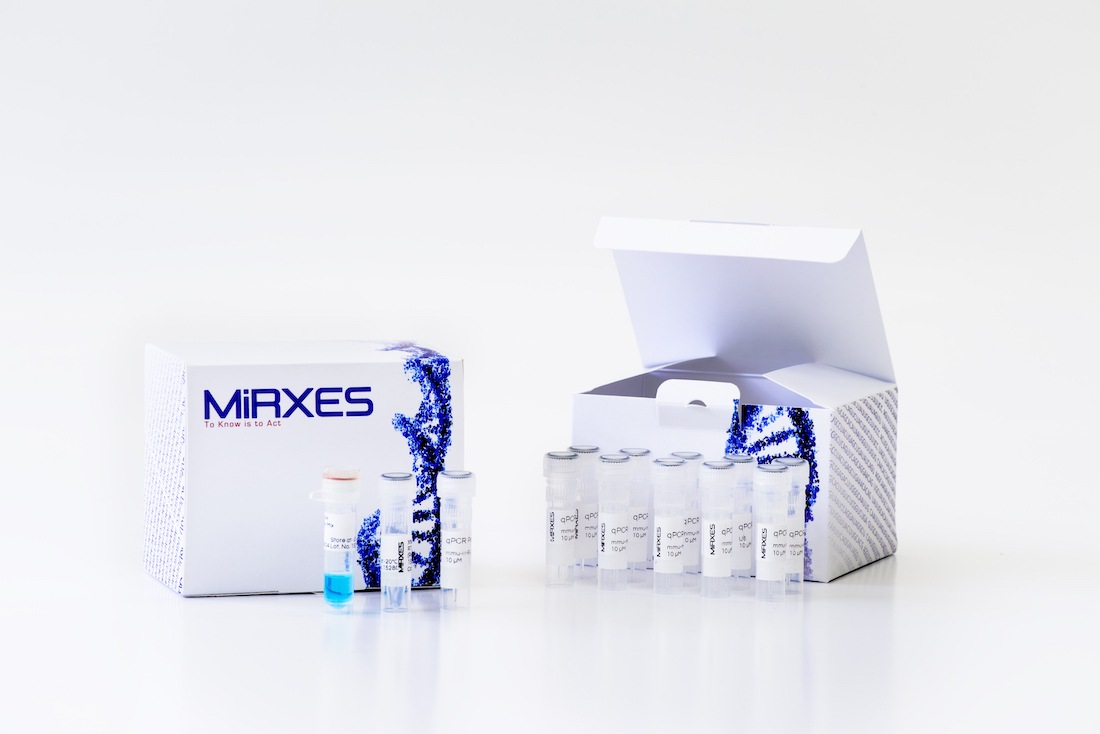 Dealing with red tape within public institutions, including central procurement and tendering processes, and meeting the requirement for feasibility studies before the state approves spending on new products can also be tricky. In comparison, selling to private clinics boils down to whether one physician or customer sees the value in the product.

“There may be existing purchasing policies that exclude startups, such as the requirement to only procure from companies that have a track record of sales of more than 10 years,” points out Hsien-Hui Tong, head of venture investing at SGInnovate.

Government-owned SGInnovate is one of the most active venture capital firms in Singapore’s healthcare technology scene, making four investments between August 2018 to August 2019. It has invested in firms including Tricog Technologies, See-Mode, and Web Biotech.

Tong says SGInnovate remains “more conservative yet focused” on stroke, cardiovascular ailments, and other chronic illnesses that are likely to be major causes of death a decade from now. “We will continue to add to our existing portfolio of companies in these areas,” he notes.

Meanwhile, Mirxes is actively exploring grants offered by the Ministry of Health or the National Health Innovation Center (NHIC) which could encourage public hospitals to use GastroClear by reducing procurement costs, Zhou says.

GastroClear kits currently cost between S$150 to S$199 (US$107 to US$102) in Singapore. The price depends on a range of factors, such as whether the kits are obtained from direct channels or via screening clinics and private or public institutions, and whether additional phlebotomy (blood-taking) support is required. In China, the kits are priced between 399 yuan to 499 yuan (US$57 to US$71).

As a region, ASEAN-6 (Singapore, Malaysia, Indonesia, Thailand, Vietnam and the Philippines) had a combined public healthcare expenditure of US$240 billion in 2019, placing it at 1% to 4% of total gross domestic product, according to a study conducted by Singapore’s Economic Development Board (EDB).

While that’s behind the 7.7% of GDP spent on average by countries under the Organisation for Economic Co-operation and Development, the EDB projects that healthcare public expenditure will grow to US$740 billion in ASEAN-6 by 2025. That makes Mirxes optimistic despite the obstacles in its path. 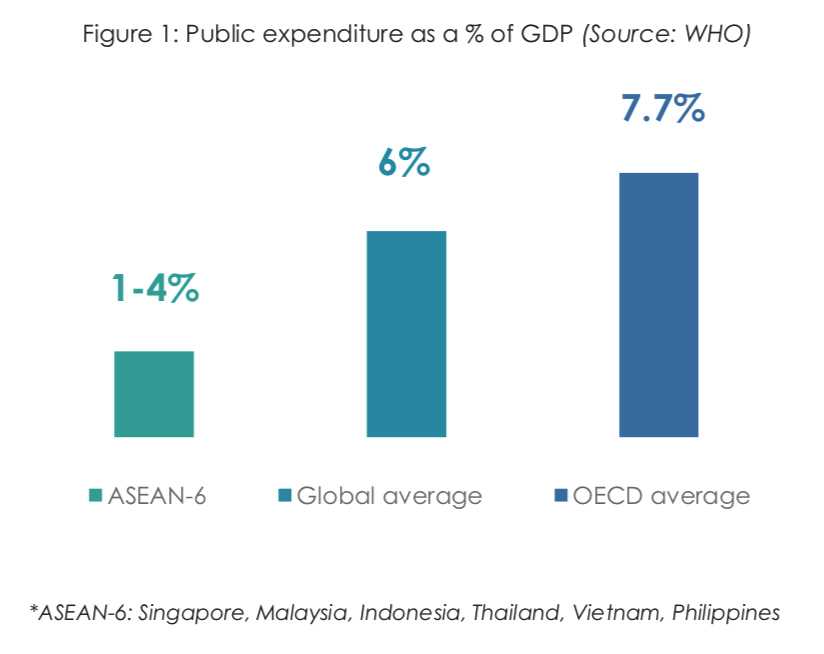 “A lot of novel products can be reimbursed fairly quickly and at a very high price in the US,” Zhou says. “In the US, a company with a single product in a single market can have a revenue of close to US$800 million within a year.” In addition, medtech firms typically obtain a reimbursement from insurance companies that help to cover the cost of research and development of a product.

Zhou did not disclose Mirxes’ current revenue figures, but he says the startup has achieved a compound annual growth rate of 90% yearly since its inception in 2014 till 2018.

It’s not just Singapore that’s underinvesting in healthcare. Collectively, Asian countries lag behind the 20% of GDP that the US spends on healthcare, generating more funds for the development of new technology in the West.

This can make it difficult for novel technologies, which take years and a lot of funding to develop, to quickly scale up. “The initial cost of either manufacturing, distribution or getting adoption is still high, before the volume kicks in,” Zhou says. “If we don’t find a good means of getting through that phase – to hit a really large volume – then cost cannot drop. If cost does not drop, it does not get mass adoption in Asia in general.”

Unlike consumer products that can be typically farmed out to places such as China to save on manufacturing costs, outsourcing the production of niche items such as those involving nucleic acid may not be cost-effective. “We don’t have a lot of suppliers in Asia that are truly capable of delivering both quality and low costs,” the Mirxes CEO says.

The startup has invested in its own manufacturing capabilities as a way to control spending associated with commercializing medtech products – a fairly uncommon practice for Asian medtech firms.

Generally, they keep a research and development facility while delegating production and commercialization efforts to a regional company. The kind of capability that Asian medtech companies have to build is way more than what US companies have to develop at the same stage, according to Zhou. 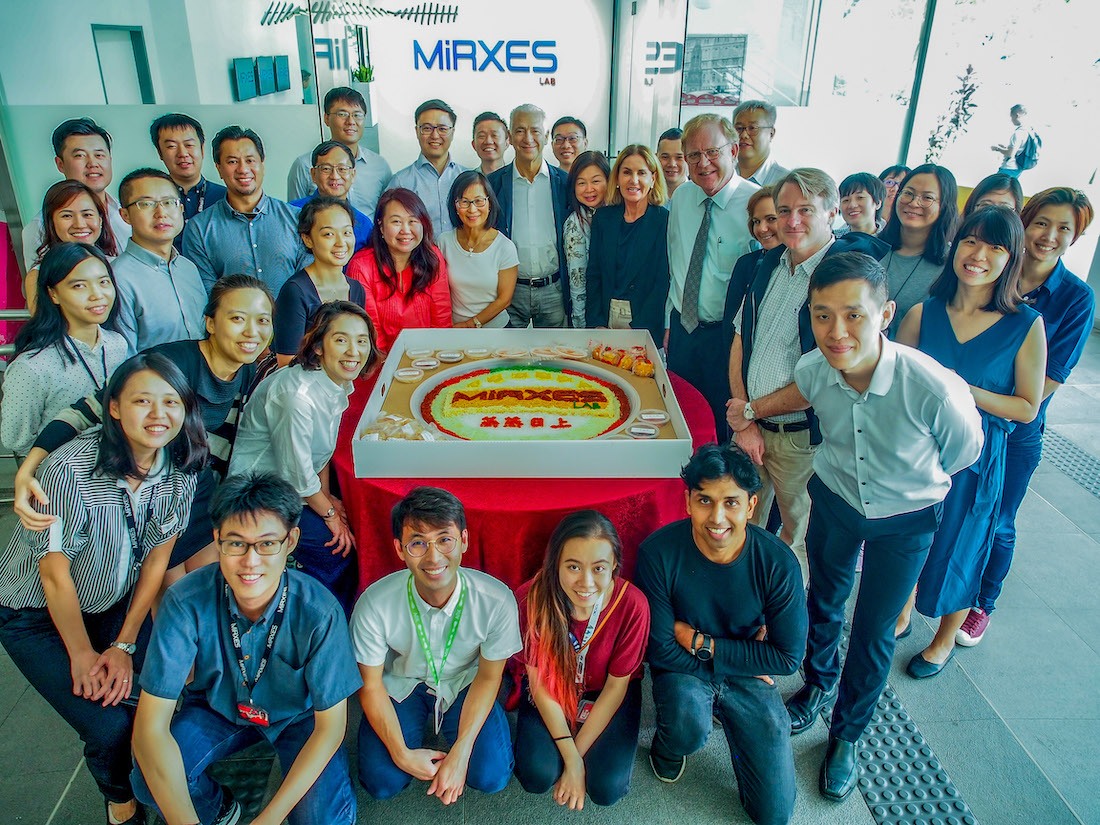 The Mirxes team at the opening of their new office at Biopolis Synapse building this year / Photo credit: Mirxes

An unintended – and positive – effect of doing so is Mirxes’ transitioning from R&D to manufacturing. It’s able to employ its production capabilities to help partner companies transform their research into physical diagnostic kits, as was the case with the Covid-19 kits.

Mirxes will also soon begin a prospective clinical trial for one of the world’s top five pharmaceutical companies. This will involve 60 hospitals in the US and Europe, collaborating to develop a non-oncology application.

“This project happened because they saw the value of Mirxes not only as a niche microRNA technology developer, but with a complete capability of translating research into a regulatory approved diagnostic kit,” Zhou notes.

Since bringing GastroClear to market, Mirxes has moved into the next phase. It’s now studying the feasibility of creating a similar early-detection kit for lung cancer, working with a global consortium of scientists in the US, Italy, China, and Japan. The startup has over 20 different disease areas in its clinical pipeline, including diabetes and heart ailments as well as some neurological diseases.

Fundraising continues to be an ongoing process for Mirxes, which has raised US$43.5 million in series A and seed funding to date. Revenue is “growing steadily,” according to Zhou, with one of its business units expected to break even this year. While 2020 is shaping up to be a tough time for startups looking for financing, the startup is “not pressured to raise money that soon,” he adds.

Mirxes expects to achieve at least 30% of revenue as it enters new markets like Japan and diversify into agricultural and veterinary technology, while growing its core business units in in-vitro diagnostics, life sciences reagents, and contract development and manufacturing.

At the same time, Mirxes is looking to strengthen its core microRNA and platform businesses. “If there are additional technologies that we can partner with people to develop, that will [help] us in creating a total solution for early cancer screening, we will definitely say yes to that,” Zhou says.